For other uses, see Cheydinhal.

Cheydinhal is the city closest in Cyrodiil to the Morrowind border near the Velothi Mountains and the Valus Mountains. Being so close to Morrowind, Cheydinhal is populated and influenced considerably by the Dunmer. To the north is Lake Arrius; to the south, the Reed River and to the southeast, Lake Poppad. Cheydinhal is built next to a lake at the foot of the mountains. The city is ruled by Count Andel Indarys. A house is available in this town for 15,000

. Cheydinhal is accessible from the Imperial City by walking along the Red Ring Road going east to the Blue Road. The Cyrodiil branch of the Dark Brotherhood is located here as well.

The first impression of a visitor to Cheydinhal is that of broad green parklands and graceful willows. Along the banks of the Corbolo River, neatly groomed gardens and flowering shrubs adorn the edges. Cheydinhal is prosperous with clean, well trimmed houses and neat stonework, ornamented with striking designs in glass, metal, and wood.

One of the Dunmer immigrants who left Morrowind to come to Cyrodiil became Count Cheydinhal. Andel Indarys was of House Hlaalu in Morrowind, but he came to Cheydinhal searching for greater opportunity. His sudden rise into the highest ranks of Cyrodilic nobility is hard to explain, and most of the old and established families of Cyrodiil rightly regard him as a presumptuous upstart. However, the discovery of the Count's wife, Lady Llathasa Indarys, badly battered and dead at the foot of the County Hall stairs immediately attracted scandal, and rumors of the Count's dissipation, rages, and infidelities suggests a darker mystery behind her death.

Cheydinhal is divided into three districts. To the north, on a hill is the courtyard and inner keep of Castle Cheydinhal. A road runs east-west below the castle from East Gate to West Gate. The Corbolo River runs roughly north-south from this road, dividing southern Cheydinhal into two districts, Chapel in the east, and Market in the west. In the Market District, lie all the shops, inns, and guild halls. In the Chapel District is the Chapel itself and Cheydinhal's residences. Bridges span the Corbolo in the north and south, with the south bridges connecting upon a little island park in the middle of the river.

In the eastern section of Cheydinhal, there is an "Abandoned House" that is only being used as a front to the Dark Brotherhood, a cult of assassins. The Count is allegedly aware of its existence.[1]

The Great Chapel of Arkay in Cheydinhal is poorly attended. The Count does not set a good example, as he never sets foot in the Chapel.[source?] Cheydinhal's primate, priest, and healer are good people, and staunch professors of the faith, but the most honored and respected of the chapel's clerics is Errandil, the Living Saint of Arkay, a tireless crusader against the wicked practice of necromantic sorcery in the Mages Guild and the Fighters Guild.

The poorest of Cheydinhal's residences are bright and clean, with well-groomed grounds.

Though Cheydinhal lies in Nibenay, its culture is shaped by the Dark Elf immigrants who migrated there in the past half century from the neighboring Morrowind. Many of these immigrants were fleeing Morrowind's rigid society and heathen Tribunal Temple theocracy. In Cyrodiil, they hoped to find the stimulating commercial atmosphere inspired by Zenithar's patronage.

The shops and inns are all located in the western section of the city, located between the guess. Cheydinhal has two inns with rooms available for rent. The Newlands Lodge is owned by a Dark Elf, and sells rooms for 10

a night, while the Cheydinhal Bridge Inn is owned by an Imperial matron, who sells rooms for 25

a night. The owner and proprietor of Cheydinhal's bookstore, Mach-Na, provides a selection of books for purchase. Armor and weapons can be bought and sold at The March Rider. One can trade general goods at Borba's Goods and Stores.

The Cheydinhal Fighters Guild is operated by Burz gro-Khash, who offers quests to the Hero of Kvatch. They are in order:

The Cheydinhal Mages Guild, run by six mages of apparently equal power, in the Guildhall located behind the Cheydinhal Bridge Inn, the first building seen on the right when entering from the West Gate. Quests:

The Cyrodiil location is located in the Abandoned House.

The seal of the city 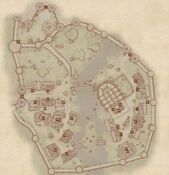 Deutsch Español Français Nederlands Polski Русский
*Disclosure: Some of the links above are affiliate links, meaning, at no additional cost to you, Fandom will earn a commission if you click through and make a purchase. Community content is available under CC-BY-SA unless otherwise noted.