The Chimer (Aldmeris: People of the North[1]), also called the Changed Folk,[2] Changed Ones,[3] or Velothi,[4] are ancestors of the modern Dunmer, or Dark Elves. The Chimer clans followed the Prophet Veloth out of the ancestral Elven homelands in the southwest to settle in the lands now known as Morrowind. As evidenced by Almalexia and Vivec, the Chimer had golden skin color similar to that of the Altmer.

The Chimer were one of several races of Mer during the Merethic Era, who are descendants of the Aldmer.[5] But unlike the rest of their Elven kin, especially the Dwemer, they appear to have more interest in worshipping the Daedra, whom they consider to be more powerful, therefore more worthy of their worship, than the Aedra. Due to conflicts about their religious beliefs, the Chimer eventually left the Summerset Isles to search for a new homeland. They are described as being "dynamic, ambitious, long-lived Elven clans devoted to fundamentalist ancestor worship."[5]

The prophet Veloth led his people out of their ancestral homelands in the southwest to settle in the lands now known as Morrowind (which was known as "Resdayn" at the time Veloth and his people arrived there).[5] There they encountered the Dwemer, a group of technologically advanced Elves who mocked the Chimeri religion.[6] These religious disagreements would eventually lead to serious conflicts with the native Dwemer.

War with the Nedes[]

At some point the Chimer were known to have gone to war with the Nedes of Skyrim and Cyrodiil.[7] After a few years, the Nedes controlled an area known as the Stonefalls. Then the Chimer army came from the Inner Sea and brought reinforcements from Vvardenfell. Brothers General Balreth and Legate Sadal were with a small elite force that took refuge in a Daedric Ruin. The brothers sacrificed themselves to create the Brothers of Strife and defeated much of the Nedic army.[8] Because the Chimer had become the Dunmer following Azura's curse in 1E 700, it can be understood that this battle had taken place prior to the Chimer's transformation.

Eventually, the Dwemer and the Chimer ran into conflict. Most of it was due to disagreements about the gods, but in addition it is said that the Chimer longed for the land the Dwemer controlled. At first the Dwemer experienced minor raids from the Chimer, but as time went on, the feuds between the two races started getting much more heated.[5]

While the Dwemer were an agnostic people, preferring reason to faith, the Chimer were staunch Daedra-worshippers, and considered the Dwemer's lack of belief an affront to their gods.[9]

Owing to the threat posed by the Nordic Empire, an alliance was created between the Chimer and the Dwemer. (Incidentally, the events of this are the source of the main quest in Morrowind). The High Dwemer King Dumac, and the Chimer Hortator of the Great Houses, Indoril Nerevar, were chosen to repel the Nordic invaders. They were able to do this successfully.[6]

The final battle the Chimer had with the Dwemer was at the Battle of Red Mountain, where the Dwemer wanted to harness the power of the Heart of Lorkhan and attempt to achieve divinity. As the Chimer and Dwemer fought along the side of the mountain, suddenly all the Dwemer disappeared and were never heard from again (except for one). After the battle, Sotha Sil decided to try and use the Dwemer tools to see if godhood could actually be achieved through the Heart. He eventually found out it could be done, and convinced Vivec and Almalexia to become gods with him. As the three used the tools on the heart, they betrayed Azura, breaking their pledge to her and used the heart to become the Tribunal. Azura, in her fury over this, turned the whole Chimer race's skin dark as ash and their eyes red. On this day, almost all Chimer became the Dunmer, or the "Cursed Ones."[citation needed]

The last known remaining members of the Chimer after Azura's transformation were the Tribunal, who after using the Heart of Lorkhan, became gods. Sotha Sil turned into a Dunmer after the curse, and Vivec chose to become part Chimer and Dunmer, resulting in Almalexia being the last pure Chimer alive. Almalexia later died at the hands of the Nerevarine, who in self-defense killed her, after she lost her godhood and sanity.[10] All that remained of the Tribunal was Vivec, who after the completion of the Nerevarine Prophecy, may or may not have lived past the Fourth Era after losing his godhood.[11]

Almalexia as she appeared in The Elder Scrolls III: Morrowind.

Legate Sadal, a Chimer legate during the war with the Nedes and one of the Brothers of Strife. 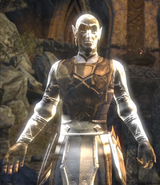 The spirit of Saint Veloth, the Chimer prophet.

Čeština Deutsch Français Italiano Nederlands Polski Русский Türkçe Українська
*Disclosure: Some of the links above are affiliate links, meaning, at no additional cost to you, Fandom will earn a commission if you click through and make a purchase. Community content is available under CC-BY-SA unless otherwise noted.
Advertisement