During the Interregnum in 2E 582, the Daedric forces of Molag Bal had taken over the Imperial City and infested the entire region. Each of the six district within the city was ruined, with Daedroths, Flesh Colossus, and Grievous Twilights roaming the streets. The Imperial City Sewers began to resemble the depths of Coldharbour when Daedric Rifts and Coldharbour Spikes began to jut out of the ground. The center of the sewers, the Barathrum Centrata, had a large daedric structure with several rifts surrounding the structure. The denizens of the Imperial City were prisoners of war and tortured by the daedric warriors. Some of them were able to escape into the Heartlands or into the edge of the Sewers, where the Alliances of the Alliance War were stationed.[3]

Before the Oblivion Crisis in 3E 433, members of the Septim Dynasty were being assassinated by the Mythic Dawn Cult of Mehrunes Dagon. Emperor Uriel Septim VII would escape into the Imperial Sewers with members of the Blades and a Prisoner who just so happened to be put in a cell leading to an escape route. The group was encountered by Mythic Dawn agents who slew Uriel Septim in the sewers, seemingly ending the Septim Dynasty. Believing they had a cosmic purpose, Uriel VII gave the Prisoner the Amulet of Kings and was sent to Weynon Priory to meet Grandmaster Jauffre of the Blades. From there, they would start their search to find the missing heir to the Septim Throne and end the impending Oblivion Crisis.[4] 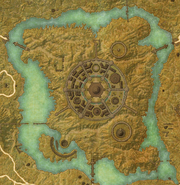 Map of the City Isle during the Interregnum.

A style of Imperial clothing originating from City Isle.
Add a photo to this gallery

Notice: The following are unlicensed references. They are not copyrighted by a ZeniMax Media company, but can still be considered part of The Elder Scrolls lore and are included for completeness.
Retrieved from "https://elderscrolls.fandom.com/wiki/City_Isle?oldid=3160013"
*Disclosure: Some of the links above are affiliate links, meaning, at no additional cost to you, Fandom will earn a commission if you click through and make a purchase. Community content is available under CC-BY-SA unless otherwise noted.