"Adoption of the Riddle'Thar Epiphany was not without controversy: when the priests of the Shrine of the Consummate S'rendarr in the Jodewood refused to accept the new edicts, they were exiled and the temple desecrated. Today it is a bandit lair."
―Claw's Strike Loading Screen[src]

Claw's Strike is a ruin that appears in the region of Reaper's March in The Elder Scrolls Online.

To Honor the Fallen 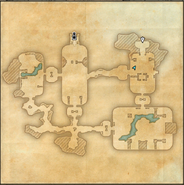 Retrieved from "https://elderscrolls.fandom.com/wiki/Claw%27s_Strike?oldid=3044384"
*Disclosure: Some of the links above are affiliate links, meaning, at no additional cost to you, Fandom will earn a commission if you click through and make a purchase. Community content is available under CC-BY-SA unless otherwise noted.