"I am the Empress Regent, and I've returned to claim the Ruby Throne from these Daedra. They've sullied it long enough."
―Clivia Tharn[src]

Empress Regent Clivia Tharn is the most recent ruler of Cyrodiil during The Elder Scrolls Online. Clivia ruled the Empire of Cyrodiil in the absence of her husband Varen Aquilarios for three years, until Molag Bal initiated the Planemeld and overran the White-Gold Tower.

Clivia is a member of the Tharn family. Her father, Abnur Tharn, is High Chancellor and Imperial Battlemage of the Elder Council, and her mother is his seventh wife.[1] When she was about 7 years old, Clivia played a boardgame known as Imperial War-Chess with her 6-year-old sister Euraxia. Clivia played an illegal move, outraging her sister, who said that when she was queen of Rimmen, she would "get hers." Clivia was unimpressed, stating that one day she would be Empress.

When Prince Leovic, son of the then Emperor Moricar, came back successful from his first campaign against border raiders, his father praised him and said that he could name his reward. Leovic asked for Clivia's hand in marriage, and they were later wed. Clivia had later become the Emperor's consort when Leovic was crowned.

After Leovic's regicide, Clivia was remarried to his successor Varen Aquilarios. After Varen's disappearance in 2E 579, Clivia assumed the throne as Empress Regent, and ruled until 2E 582.[2]

When Molag Bal initiated the Planemeld, it was thought that she was among those killed by the Dark Anchors.[3] With the Empress absent and the Empire crippling, the Three Banners War broke out and numerous soldiers had gone to hold that title one by one, depending on whose faction they were on. Clivia however, refers to them as merely false pretenders. She has recently returned with ambitions to retake the tower.[3]

Clivia will be waiting in the White-Gold Tower basement for the attack on the Throne Room.

Who are you? "Don't you recognize the ruler of the Imperial Empire when you see her? I am the Empress Regent, and I've returned to claim the Ruby Throne from these Daedra. They've sullied it long enough."

What's an Empress Regent? "There's no hope for people like you."

You plan to retake the Tower? Why not call for reinforcements? "These few are all I could muster. My most trusted. The generals assure me there are more defensible targets than the Imperial Palace, than the Ruby Throne. They refuse to support this assault It's near-blasphemy."

You can't be the Empress. I'm the Emperor/Empress. (If an Emperor) "You're among the pretenders I hear so much about, passing the false title of ruler among yourselves like some lewd disease. You sicken me. I will end the struggle in Cyrodiil today. As if one could force their way onto the Ruby Throne."

But that's what you're trying to do right now. "The throne is mine by right! Once we remove the Daedra from this Imperial property, I will rule from atop it once again. Enough talk. Let's move."

I was the Emperor/Empress once. (As a former Emperor) "You're among the pretenders vying for the throne in Cyrodiil? You swine. You will never lay claim to that false title again. When White-Gold Tower is mine again, I will restore order to the Empire."

Clivia Tharn: "My patience grows thin, sister."
Sister Terran Arminus: "We've had our differences, but when have you ever known me to be wrong?"
Clivia Tharn: "Yes, yes, I suppose that's true. A few more moments then.

After saying that, Sister Terran Arminus will approach the pedestal and it will light up with blue energy, revealing the Elder Scroll.

The following conversation will occur through the first Speaking Stone:

The following conversation will occur through the second Speaking Stone:

After defeating The Scion of Wroth, Sister Terran Arminus will have the following dialogue with Clivia Tharn:

Sister Terran Arminus: "This won't end well for you, your majesty. Leave the scroll. Stop this!"
Clivia Tharn: "You underestimate me, wretch!"

The following conversation will occur through the third Speaking Stone:

Molag Kena, the Xivkyn who was masquerading as Clivia 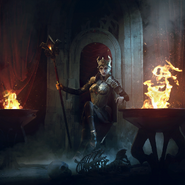 Clivia Tharn in Legends
Add a photo to this gallery

Retrieved from "https://elderscrolls.fandom.com/wiki/Clivia_Tharn?oldid=3107212"
*Disclosure: Some of the links above are affiliate links, meaning, at no additional cost to you, Fandom will earn a commission if you click through and make a purchase. Community content is available under CC-BY-SA unless otherwise noted.