"Clockwork City, also known as Sotha Sil, after its creator, is said to be a great and intricate mechanism that duplicates the mythic structures of Nirn in metallic miniature. Only Seht himself knows its true purpose."
―Clockwork City loading screen[src]

Exterior of the city in Seht's Vault 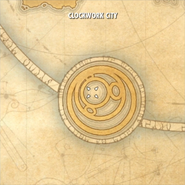 Clockwork City on the world map

The following are previews of the Clockwork City from 2015, during the time it was still in early development:

Deutsch
*Disclosure: Some of the links above are affiliate links, meaning, at no additional cost to you, Fandom will earn a commission if you click through and make a purchase. Community content is available under CC-BY-SA unless otherwise noted.