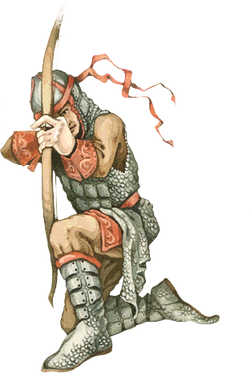 The art of combat involves the use of weapons and armor to defend oneself from harm. It also functions as a class specialization for both pre-made and custom classes in most games. Classes specializing in "Combat" include: Archer, Barbarian, Crusader, Knight, Rogue, Scout, and Warrior.

The amount of damage done to an opponent depends on several things:

To use power attack, one must hold down the attack button. Each rank in Blade and Blunt upgrades the Basic Power Attack to a Mastery Power Attack in a specific direction.

Those proficient in Hand-to-Hand have the same Novice, Apprentice, and Journeyman attacks, but also have special effects for Expert and Master level:

Blocking is governed by the Block skill and reduces or neutralizes melee damage from an opponent. Melee attacks can be blocked with shields or, if experienced in Hand-to-Hand, with arms. Like attacks, blocking also provides unique blocking abilities at each rank of experience:

Alternatively, one may want to learn how to circle an opponent and dodge or step away from them when they attack, to avoid being hit in the first place.

If Fatigue is depleted during combat, either by being hit with Hand-to-Hand or a Drain Fatigue or Damage Fatigue spell, then the character will be temporarily knocked down. They will get back up again once fatigue recovers.

Enemies can be knocked down by either destroying their Fatigue or using a Mastery Backwards Power Attack (Expert level required) on the foe, which has a chance of knocking them down.

A character with Journeyman level Acrobatics skill can do a quick avoidance roll by pressing block and jumping in a direction to quickly roll in that direction. If the speed is high enough, an enemy's power attack can usually be dodged without rolling by simply moving out of the way.

To Yield, simply block and press the use button on the attacking character as if to talk to them. Depending on the situation and their disposition, they may accept the yield and stop fighting. The amount of disposition is different for each NPC.

Creatures and permanently-hostile NPCs (like Bandits) never yield naturally. However, if a Charm spell (such as Captivate) is used with a 100-point Disposition boost, the Bandit will yield and even discuss rumors. The Bandit will, however, attack as soon as the Spell wears off.

An exploit has been found with regard to yielding.

A common tactic used in combat is to block an enemy's strike using a weapon or shield.

Even a simple block offers an opening to strike, either with spells or weapons. A wise strategy is to block as default, and watch for the open-chested weaknesses most creatures have.

An experienced blocker using high quality hardware will be more likely to stagger an enemy.

Judicious use of blocking is the foundation of advanced melee combat.

Retrieved from "https://elderscrolls.fandom.com/wiki/Combat?oldid=2874831"
*Disclosure: Some of the links above are affiliate links, meaning, at no additional cost to you, Fandom will earn a commission if you click through and make a purchase. Community content is available under CC-BY-SA unless otherwise noted.