For other uses, see Combat.

Combat in The Elder Scrolls: Arena is the act of being in an armed conflict with at least one hostile opponent. Combat in Arena and Daggerfall is significantly different than the more recent titles. Instead of Combat being accomplished by clicking and relying heavily on the weapon itself, combat in Arena is accomplished by different ways of moving the mouse across the screen in different directions. The direction of the mouse also determines your chance to hit an enemy, and your damage.

In order for the Eternal Champion to draw their weapon, they must click on the crossed swords icon, their weapon will then rise on the right side of the screen. When the Champion wants to sheathe their weapon again, they will have to click the crossed swords icon again. Swinging the weapon is linked to the right mouse button, if the Eternal Champion moves the mouse while holding down the right mouse button, the weapon will "mimic" their mouse movement. The following are possible melee attack moves in Arena:[1] 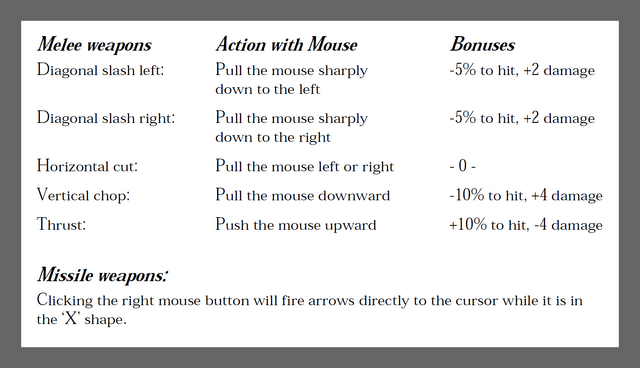 Depending on the Eternal Champion's attack, the following melee attack combinations are possible:

Combat with bows is a bit different, the Eternal Champion pulls out their bow by clicking on the crossed swords icon again. However, the Champion does not need arrows in order to fire their bow, instead bows are worn out by continued use and need to be repaired. The Eternal Champion can fire their bow by aiming their cursor at an opponent and then right clicking where they want the arrow to go. Damage and fire rate is dependent on the quality of the bow. A high quality bow can do high damage while shooting rapidly while lower quality bows shoot slower and do less damage.

The Eternal Champion can also use spells to fight opponents. Spells can either be offensive spells or defensive spells. In order to cast spells, the Champion must first click on the cast spell icon. After that, the Eternal Champion can then click on the spell they wish to use from the list. If the same spell wants to be cast again, the Champion may right click the spell icon or do Shift + C to save time. Using a magic item works the same way, except they click on the "Use Magic Item" icon instead.

Retrieved from "https://elderscrolls.fandom.com/wiki/Combat_(Arena)?oldid=2875428"
Community content is available under CC-BY-SA unless otherwise noted.