Concern for Nulfaga is an optional quest in the main quest of The Elder Scrolls II: Daggerfall.

At any time after reaching 3rd Level, enter the Throne Room in Daggerfall Castle, and speak with Queen Aubk-i. She will express concern over King Gothryd's grandmother, Nulfaga, and ask the player to check on her at Shedungent castle in the Wrothgarian Mountains. Around 150 days are given to complete the quest.

Upon arriving at Shedungent, enter the castle. On the automap, there will be a secret door directly at the T-intersection. The destination is on the other side of that door.

There will be two enemies, in the Throne Room. After dealing with them, go up either set of stairs to find Nulfaga at the top. Activate her to find out that she is not quite sane. Activate the lich statue near the south door (respond "shut up") to open the door and the dungeon exit will be directly in front.

Aubk-i, the Queen of Daggerfall, has asked me to check on the condition of her grandmother-in-law, Nulfaga. I am to go to Nulfaga's castle Shedungent of Worthgaria, and have to talk to her to see if she is well. I have 150 days to report her condition to Abuk'i and get my reward. 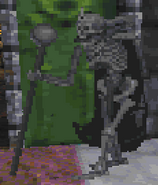 The skeletal doorman behind the easy entrance easter egg
Add a photo to this gallery
Retrieved from "https://elderscrolls.fandom.com/wiki/Concern_for_Nulfaga?oldid=2783927"
*Disclosure: Some of the links above are affiliate links, meaning, at no additional cost to you, Fandom will earn a commission if you click through and make a purchase. Community content is available under CC-BY-SA unless otherwise noted.