"I was an ashkhan. I led my people against the Akaviri while the Cyrodiil dogs fled before them like kagouti. I quested deep into the strongholds and Red Mountain, cleansing the unclean things in their own blood. I did not heed the counsel of the women, and, to my shame, I craved glory, but never saw my real enemies."
―The Spirit of Conoon Chodala[src]

Conoon Chodala or simply, Chodala was the Ashkhan of Ald'ruhn during the Interregnum and the Alliance War. He was a Failed Incarnate of the Nerevarine, and at one point had the potential of destroying Vivec City and killing Vivec of the Tribunal.

In his youth, Conoon Chodala was a veteran of the Second Akaviri Invasion. He was likely involved at the Battle of Stonefalls, the conflict that created the Ebonheart Pact. He returned to his tribe, the Urshilaku Tribe and became the Ashkhan of Ald'ruhn. He would continue to rule as the Ashkhan of Ald'ruhn up until 2E 583. Chodala came into the possession of Sunna'rah, a great staff created by Sotha Sil. The staff was repurposed by Chodala to steal the life energy from Vivec, which caused Baar Dau to slowly fall from the sky. He would soon believe himself to be the Nerevarine that was foretold in the Nerevarine Prophecy. Chodala was confronted by both Seryn, Wise Woman Dovrosi and an Outlander called the Vestige about his claim as the Nerevarine. Even though the past Failed Incarnates told him their mistakes and that their actions lead to their downfall. Unconvinced, Chodala escaped Ald'ruhn and left his warriors, the Red Exiles to fend off the Ashlanders. Chodala fled to the ruins of Kaushtarari on Azura's Coast to call upon Malacath to help him in his endeavors. Malacath refused to help since he was influenced another Daedric Prince. Chodala was later defeated when Sunna'rah was weakened by another device called the Tonal Inverter.[1][2][3]

In 3E 427, the true Nerevarine appeared on the isle of Vvardenfell and the Nerevarine Prophecy came to fruition. The Nerevarine roamed across the region to unite the people of Morrowind to fight against the Tribunal. The Nerevarine traveled to the Urshilaku Camp in the northern Ashlands and commenced the Third Trial of the Prophecy. Ashkhan Sul-Matuul sent them to the ruins of Kogoruhn and eventually the Cavern of the Incarnate at the end of the Valley of the Wind. It was there the Nerevarine met the Failed Incarnates of the past, including Conoon Chodala. Chodala told the Nerevarine their exploits and their eventual demise. With this knowledge, the Nerevarine continued through the cave and earned the Moon-and-Star, a ring originally owned by Indoril Nerevar.[4] 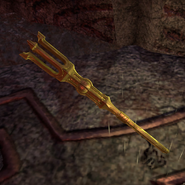 Seryn, Chodala's sister.
Add a photo to this gallery

Retrieved from "https://elderscrolls.fandom.com/wiki/Conoon_Chodala?oldid=3079626"
*Disclosure: Some of the links above are affiliate links, meaning, at no additional cost to you, Fandom will earn a commission if you click through and make a purchase. Community content is available under CC-BY-SA unless otherwise noted.