For other uses, see Corgrad Wastes.

"The reach of Thras has been felt far beyond its own land. The Thrassian Plague, which decimated Tamriel's population in the year 2260 of the First Era, was their most egregious attack against the mainland, but other, subtle predations have also been recorded."
―Corgrad Wastes Loading Screen[src]

Corgrad Wastes is a ruined town that appears in The Elder Scrolls Online: Summerset. It is located southwest from The Crystal Tower.

The city-state suffered from the Thrassian Plague which arrived to the city with a fleet of fishermen. The ruler of the city, Kinlord Nefarion, had the afflicted by the disease quarantined in his manor's crypts. Sometime later he issued a decree that none may enter or leave Corgrad until this plague has passed. After several months, because of unrest caused by the isolation, and the whole population being affected, Nefarion chose to break the western city wall and flood the city trying to prevent the disease from spreading. 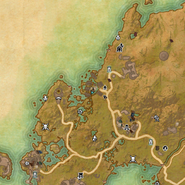 Inescapable Helm map
Add a photo to this gallery

Retrieved from "https://elderscrolls.fandom.com/wiki/Corgrad_Wastes_(Online)?oldid=2922085"
*Disclosure: Some of the links above are affiliate links, meaning, at no additional cost to you, Fandom will earn a commission if you click through and make a purchase. Community content is available under CC-BY-SA unless otherwise noted.