watch 04:14
'The Elder Scrolls Online' First Adventure Zone: Craglorn Trailer
Do you like this video?

"Though crossed by caravans and Covenant troops going to and from Cyrodiil, this wild region of eastern Hammerfell is a virtual no-man's-land. It's anchored on the east and west by the towns of Elinhir and Dragonstar."
―Craglorn Loading Screen[src]

It is a desolate region situated between Hammerfell, High Rock, Skyrim, and Cyrodiil, that is besieged by strange, otherworldly creatures, marauding Orcs, and beings of immense power known as Celestials. An army of ancient, risen warriors of Yokuda lay siege in the west, led by the Celestial Warrior, while atronachs defile the land in the east, under the command of the Celestial Mage. In the north, an army of Iron Orcs under the command of the Celestial Serpent lays waste to the surrounding lands.

The main storyline of Craglorn revolves around the disappearance of the constellations and how the otherworldly Celestials (the Warrior, the Mage, the Serpent) are impacting Craglorn. The Undaunted offer 12-player trials in which players compete for a place on the leaderboards, while facing environmental hazards, bosses with unique tactics, and limited resurrections.[1] 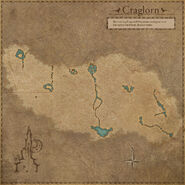 Retrieved from "https://elderscrolls.fandom.com/wiki/Craglorn?oldid=3078396"
*Disclosure: Some of the links above are affiliate links, meaning, at no additional cost to you, Fandom will earn a commission if you click through and make a purchase. Community content is available under CC-BY-SA unless otherwise noted.