For other uses, see Creatures.

The following are creatures that appear in The Elder Scrolls III: Tribunal.

She is one of the Tribunal gods, and once was a Chimer. She is fearsome, and has tremendous magical powers. She will require the help of the Nerevarine during the main quest.

The following is the list of unique named creatures found in Mournhold, in Old Mournhold, inside the Daedric Ruins of Norenen-dur and the Dwemer Ruins of Bamz-Amschend:

Radac is a Dwemer ghost found in Bamz-Amschend, Radac's Forge. He is one of the friendly creatures, the Nerevarine will require it's help during "The Blade of Nerevar."

A unique dremora lord who possesses a potion the Nerevarine needs to repair Trueflame. Khash-Ti can be found in the Citadel of Myn Dhrur inside the Daedric Ruins of Norenen-dur beneath Mournhold's Plaza Brindisi Dorom.

Another friendly ghost found in Old Mournhold's Temple West Sewers. He was assassinated by the Black Dart Gang and will need the help of the Nerevarine during the quest "The Black Dart Gang" to rest in peace.

Barilzar was a powerful mage from the Second Era, whose hostile and lethal ghost still haunts the halls of Old Mournhold's Abandoned Crypt. The Nerevarine will be confronted to him during the quest "Barilzar's Mazed Band."

Another deadly Lich that roams its tomb and can be found during the quest "Crimson Plague."

A goblin warchief found in Old Mournhold: Tears of Amun-Shae and who is training hordes of goblins in preparation of their invasion of Mournhold.

The second goblin warshief the Nerevarine must defeat during the quest "The Goblin Army."

The following is the list of the many different types of creatures that can be found across Mournhold, in its sewers and Clockwork City:

A group of powerful Liches guarding Old Mournhold's Temple Shrine during the quest "The Shrine of the Dead."

Goblins are, relatively intelligent, warrior like creatures, that vary in size from smaller than a Bosmer to larger than a Nord.[1] Their warchiefs use a plethora of different offensive spells, lower ranking goblins do not rely on the use of magic, apart from a high health regeneration, instead, they are fierce combatants at close range wielding their custom made weapons. During the quest "The Goblin Army" it is revealed that King Helseth is secretly raising an army of Goblins in Old Mournhold. There are several types of goblins:

Durzog are creatures often used by Goblins as guards and to protect them. They are powerful reptilian beasts that use quick slashing and biting attacks. Three varieties of the Durzog exist: the regular, wild Durzog, and the powerful, Goblin-trained War Durzog, which can be distinguished by a spiked collar,and the Diseased Durzog. They can mainly be found in Old Mournhold during the quest "The Goblin Army."

The Imperfect are large mechanical golems constructed by Sotha Sil, they serve him as bodyguards. They use powerful magic and have high magical resistance. Although two Imperfects can be seen in Clockwork City, only one is functional.

Many Liches can be found throughout Old Mournhold, and start appearing as the Nerevarine reaches higher levels.

During the quest "Crimson Plague," an infestation of diseased rats will flood into Mournhold. They are common rats that can inflict their opponents with the crimson plague that drains Fatigue and agility, endurance and strength.

Fabricants were created by Sotha Sil, they exhibit both mechanical and organic properties. They are mainly found in Sotha Sil's Clockwork City. Two kinds of Fabricants exist:

Hulking Fabricants are one of two types of fabricants that appear during "An Attack on Mournhold" and are also found in Clockwork City. They are slow and powerful, especially when compared to their counterpart, the "Verminous Fabricant."

Verminous Fabricants are one of two types of fabricants that also appeared during "An Attack on Mournhold" and roam the halls of Clockwork City. They are very fast.

The mysterious Dwemer left behind many mechanical creatures, that still patrol the halls of their abandoned Citadels, one of these ruins is discovered during the quest "An Attack on Mournhold" named Bamz-Amschend. They can use enchanted weapons, the following creatures are found inside:

Steam centurions and the Advanced Steam Centurions, which are larger versions, use their mace-like limb as weapon and are relatively slow but deadly.

It is a variant of the Centurion Sphere, that uses deadly projectiles.

A construct that is most commonly found in Vvardenfell's Dwemer ruins and uses melee attacks.

A small creature with six legs that guards the ruins of Bamz-Amschend.

In Mournhold's Great Bazaar, a merchant named Rerlas Mon can be found selling small pets and pack rats that can carry items for the owner. The following is the list of the creatures he sells:

An insect-like creature commonly found on Vvardenfell, that can paralyze its opponent, these are friendly pets.

A friendly pet rat who is not a powerful opponent.

A larger friendly rat that can carry items. 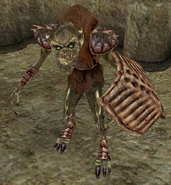 A Durzog
Add a photo to this gallery

Retrieved from "https://elderscrolls.fandom.com/wiki/Creatures_(Tribunal)?oldid=2977096"
*Disclosure: Some of the links above are affiliate links, meaning, at no additional cost to you, Fandom will earn a commission if you click through and make a purchase. Community content is available under CC-BY-SA unless otherwise noted.