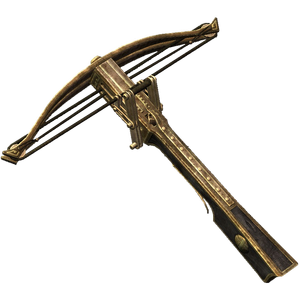 For other uses, see Crossbows.

Crossbows are projectile weapons in The Elder Scrolls V: Dawnguard. They are primarily used by the Dawnguard, a faction of vampire hunters.

Crossbows differ from bows in a number of ways. They use different ammunition, projectiles are loaded instead of nocked, and they provide a number of advantages and disadvantages compared to the standard bow.

Two main types of crossbows are available, each with an enhanced variant. Crossbows may only be forged at Fort Dawnguard.

Two types of crossbow bolts are available—steel bolts and dwarven bolts, along with their magical variants. Crossbow bolts can be created at a forge, with one firewood and one of the appropriate metal ingot. Recipes yield bolts in batches of ten.

Unlike arrows, crossbow bolts are stored in a quiver at the hip.

There are also exploding bolts which can only be made by finding their respective schematics. There are exploding fire, ice, and shock bolts which do 10 damage of whatever element the bolt is. These can be found by doing the "Ancient Technology" quests for Sorine Jurard. Doing so unlocks them for forging and purchasing.

See more discussions >
Retrieved from "https://elderscrolls.fandom.com/wiki/Crossbows_(Dawnguard)?oldid=3077567"
*Disclosure: Some of the links above are affiliate links, meaning, at no additional cost to you, Fandom will earn a commission if you click through and make a purchase. Community content is available under CC-BY-SA unless otherwise noted.