For other uses, see Crosswych.

"I don't know what happened to us. We're mountain folk and miners. We shouldn't be so easily cowed."
―Marent Ergend[src]

Crosswych is a relatively isolated mountain town in the north eastern part of Glenumbra, High Rock, east of the Cryptwatch Fort. It is situated on the very border with the region of Stormhaven. The town is mostly populated by miners.

Sometime in the First Era, a rich iron vein was discovered by Pinifred Lode-Finger in the nearby mountains and a mine was created. The town was founded for the miners.[1]

During the Interregnum, the town was managed by a beloved mayor, Heseph.[2][3] However, a group of bandits by the name of the Red Rooks used the chaos caused by the Bloodthorn Cult and Faolchu to seize control of the isolated and unprotected Crosswych.[4] The Red Rooks murdered the previous mayor and took over the mining operations, using the mine as a prison, and prisoners as slave labor. The Rooks' leader, Sternis Gelves, had hoped to keep the town open to travelers in the hopes of more income and taxation.[5]

A local resistance organized by the Vestige and Tamien Sellan succeed in restoring order and chasing the Red Rooks out of the town.[6] After the uprising, a previous councilor and a member of the resistance, Lia, steps up and offers herself as a candidate for mayor.[2] For the future security of the town, the Daggerfall Covenant and Fighters Guild both establish a local presence. Additionally Crosswych establishes contact with the Lion Guard.

A gang of outlaws by the name of the Red Rooks has taken over the town, killed and enslaved many of Crosswych citizens, and are now working the mine with the help of slave labor. Help form the local resistance by persuading local authorities to stand up against the occupants.

The End of Extortion[edit | edit source]

Residents of Crosswych are harassed and beaten up on the streets of the town. Help them out by punishing the harassers and rescuing the abused villagers.

Many of residents that initially resisted the Red Rook Bandits have been enslaved and are being worked to death in the Crosswych Mine. Increase the power of the local resistance forces by rescuing enslaved miners and stopping the Red Rook mining operation.

With the help of local resistance forces, kill the remaining Red Rook occupants and their leader, finally restoring order. 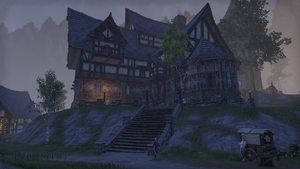 Crosswych Inn is a large, three story tavern in the town of Crosswych. It is also the largest building in the town. The inn is owned by the innkeeper, Len Belland, and his wife Aleen. Chef Smauk the Stewmaster and brewer Hisolda offer their services here.

Crosswych Inn was still open and maintained by Aleen during the Red Rook occupation and the imprisonment of Len Belland.[7] It was used as a staging ground for the local resistance led by Tamien Sellan.[8]

After the villagers retake the town, Len opens up a store and Barun the Bard can be seen entertaining guests here. Some old acquaintances like Alexia Dencent and Alinon the Alchemist can be met and talked to in the inn. 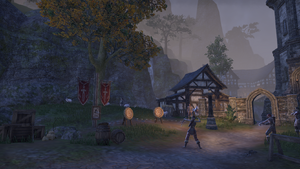 After the Red Rooks are chased out of the town, the Fighters Guild sets up a small camp and training grounds east of the Iron Mine Arms & Armor. The local branch is lead by the hall steward Sergeant Magarakh. Armsman Kalad is offering his services here.

After the occupation some of the villagers consider the presence of the Fighters Guild a guarantee for the future safety of Crosswych.[9] Some have even taken up the idea of joining the faction themselves.[10]

Iron Mine Arms & Armor is a local forge situated just south of the Crosswych Mine. It was reopened to the public after the Red Rooks had been chased out of the town. Suriel the Smith can be seen working the forge. Blacksmith Celiane Laelippe, clothier Evinn Chrirnis and carpenter Nilenir Tree-Killer offer their services here.

Gestor's Fine Goods is a general store run by the Gestor family - the merchants Vincein Gestor and Emabeth Gestor. The store kept its doors open despite the occupation of Red Rooks. Idaron Virane can be found in the cellar, hiding from the occupants of the town.[11]

Menoit's Emporium is a store run by the Menoit family - the enchanter Fabrice Menoit and alchemist Petrille Menoit. A mystic, Plays-With-Fire, can also be seen offering his services here. Magister Janona Alielle from the Mages Guild can be met just outside the store.

Saddle and Stirrup is a stable run by the stablemaster Leana Cantillon. She hid during the Red Rook occupation.[12] A stable worker Lahzga used to help with maintaining the stable, but has changed her mind after chasing out the Red Rooks.[13]

"In early 24th century of the First Era a trove of iron ore was found beneath the hills of northern Glenumbra by the celebrated Pinifred Lode-Finger. A great mine was delved to dig out the ore, and the town of Crosswych was founded to house the miners."
―Loading Screen of Crosswych Mine[src]

Crosswych Mine is an iron mine situated in the north of the town of Crosswych. Miners working the mine founded the town around it, making the mine oldest structure here.

Before the Red Rook occupation, the mine was run by the Councilor Theodore.[14] After the take-over, the Red Rooks used the mine as a prison, enslaving anyone who resisted their rule and making prisoners work themselves to death in the mines. The mining operation was overseen by Foreman Blaise.[15]

After the order in Crosswych had been restored a couple of Red Rooks hid and remained in the mine.[14][16]

Donella's House is situated south of the Menoit's Emporium. It is the home of Councilor Donella.

The Mayor's House is a large house in the north east separated from the rest of the town by a bridge. It was former home of the deceased mayor Heseph. During the Red Rook occupation, the house was taken over by Sternis Gelves and his bodyguards.[17]

Theodore's House is a house situated west of the Crosswych Inn. It is the home of the Councilor Theodore.

Virgile's House is a house on a hill, right next to the Gestor's Fine Goods. It is the home of the Councilor Virgile.

The town of Crosswych has two unlocked watchtowers. One is by the bridge to the Mayor's House and another is located at the very south of the town. While nothing of note can be found in them, some of the citizens used these as a hideout during the Red Rook occupation.[18] 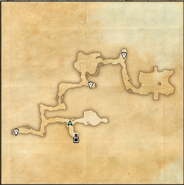 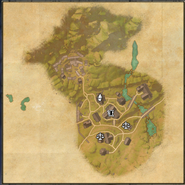 Loading Screen of Crosswych Mine
Add a photo to this gallery

Retrieved from "https://elderscrolls.fandom.com/wiki/Crosswych_(Online)?oldid=3163738"
*Disclosure: Some of the links above are affiliate links, meaning, at no additional cost to you, Fandom will earn a commission if you click through and make a purchase. Community content is available under CC-BY-SA unless otherwise noted.