Southeast of the Imperial City

For other uses, see Culotte.

Culotte is a small one-leveled Ayleid ruin located southeast of the Imperial City. Across from the entrance stands an Ayleid Well.

At first, the ruin appears to be empty, without so much as a rat alive in its halls. However, after the Hero recovers the Ayleid Statue found in the ruin several leveled zombies appear throughout the ruin. 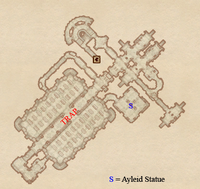