For other uses, see Cyrus.

"Is this how you will honor your Prince then? Cautious I've thought you Basil, but never before a coward. We all have waited for the prince's return. Now that he has returned you walk away, the form is different, true, but his spirit is here, here, and isn't his spirit the truest part of him? Did it occur that maybe he chose this shape and symbol as the sign of his intentions? Aye, perhaps that soul, in hated delay, snared helpless in a jewel while his men hid and shirked their duties, his duty, perhaps that soul formed itself to this, and by no mistake comes to you now, in no more fine and final form as this. A sword. You say you cannot follow a sword? Well, I say you have strayed from your own too long! Why are you here but to fight? Your prince has shown you the manner of his purest mettle, aye, in metal itself! And this true, unerring razor's message is clear beyond words, for now is not the time for words, but for brave hands, bright swords and blood! Aye boys, it's about blood now, too long frozen in your veins, and you'd rather yourself be rigid than follow me. Well, if you won't, then shamefully know that your prince will. For his blood be solid too, but strained to steel, and tempered in death. Arise the like as he, as swords as we are crowns the like as he! The prince is dead! Long live the prince!"
―Cyrus' speech to the Restless League[src]


Cyrus the Restless, also known as Sura in Yoku, was a Redguard hero and rebel during 2E 864. The story of The Elder Scrolls Adventures: Redguard starts with Cyrus returning to Stros M'kai in search of his sister Iszara, who had gone missing.[1]

Cyrus was born in Sentinel in either 2E 831[2] or 2E 834,[3] and was the younger brother of Izsara. During his younger years he often met and spoke with Tobias, a half-nord merchant and pirate, and had aspirations to become a pirate.

In 2E 852 he attended a play with his sister, which featured the actor Hakan. Hakan and Izsara soon fell in love and married later the same year. Hakan often spoke to Cyrus, and trained him with the sword in combat to teach him a few tricks. Hakan's influence was often on the political situations, such as the Forebear and Crown conflict and the ongoing Tiber wars.

Cyrus then confronted his father on the matter. His father was a loyal crown who had negative opinions on his son-in-law for his Forebear affiliation. His father explained the conflict between the two factions.

In 2E 854, his father wrote a play in the night about the ancient Ra Gada from Yokuda defeating the Orcs of Hammerfell to claim the land for their High King. This play was an attempt to solve the conflict between the two factions. The play was a huge success, and a celebration party was held in a local tavern after it finished where both Crowns and Forebears attended in equal numbers.

A 23-year-old Cyrus hosted the celebration. His brother-in-law Hakan was not so impressed. In his drunken state Hakan insulted the old playwright and challenged the also drunken Cyrus in sword combat. Iszara pleaded Hakan to stop, to which he responded Iszara with a slap to the face. They fought and Cyrus emerged the victor, plunging his sword right into Hakan's chest. Following that event, Cyrus ran away, and Tobias took him in.[4]

Life as a mercenary[edit | edit source]

Between 2E 855 and 2E 864, Cyrus worked for a Khajiit named S'rathra as a mercenary. S'rathra had sent him and Tobias to do missions in High Rock and Skyrim, as well as Black Marsh. At some point he sent Cyrus and Tobias to the slavery plantation of Tear in Morrowind to free the Khajiit slaves held there. In a surprise attack they ambushed Tear and freed the slaves, but resulted in Tobias experiencing an arm injury. Following the event Cyrus and Tobias went their separate ways, but still kept in touch via their employer S'rathra.

In 2E 864, Cyrus met with S'rathra in Wayrest at a tavern. Cyrus asked him about the next job he was to be assigned. Instead, S'rathra showed him a letter sent by Tobias. The letter involved his sister, who he said no one had seen for three months. This prompted Cyrus to buy passage to travel to Stros M'kai. He went with Captain Brennan on the journey to the island.

After arriving on the island, Cyrus received a letter from Tobias, telling him that he was at the Draggin Tale Inn. He later met with his old friend and had a conversation with him, which also mentioned the Eye of Argonia.

Cyrus met with Korthor, who tasked Cyrus with retrieving the Amulet of N'Gasta from the Sload necromancer N'Gasta on his island in exchange for gold.

Cyrus went and retrieved the amulet from N'Gasta. He then returned it to Amiel Richton, though Cyrus asked for information on his sister in return. After Richton refused to give any, Cyrus threatened him and killed his guards but was later knocked out by Dram and imprisoned in the catacombs beneath the palace.[1]

Cyrus went on to negotiate with the Restless League to see what they knew. He then learnt that they were rebel pirates fighting against the oppressive Imperial rule on the island, and that Iszara had become a member of the faction.

Cyrus found out that the Daedric prince Clavicus Vile was keeping his sister captive. He killed N'Gasta and entered the realm. After freeing her from her sleep, they escaped his realm.[1]

Cyrus then discovered that N'Gasta's amulet was in fact the Soul Gem of Prince A'Tor and that the Restless League had been keeping the prince in stasis.

Cyrus then traveled to the palace to retrieve the Soul Gem. He discovered that the gem was being guarded by the dragon Nafaalilargus. Cyrus killed the dragon and took the soul gem back to the Restless League.[1]

Cyrus, Iszara, Coyle, his mother, Saban, and the Restless League then attempted to resurrect the Prince by using the Soul Gem. Saban cast a spell which broke the soul gem. After the ritual they presumed that the spell failed.

Instead, the prince chose to enchant his sword with his soul. The sword became known as the Soul Sword. Disappointed, the Restless League lost faith in their cause. Cyrus instead gave a speech on how it was a victory. It was then discovered that the sword was capable of thinking and moving on its own. The sword guided Cyrus to the palace.[1]

Cyrus fought against the guards in the palace with the sword. He defeated the assassin Dram, who then ran off. He climbed out of the palace and fought Amiel Richton on the airship.

He defeated the Admiral, who in his last moments distracted Cyrus. This allowed the assassin Dram to hold a dagger to Cyrus' throat, telling him to drop the sword. Cyrus dropped the sword, which then moved on its own accord and killed Amiel Richton. The sword then flew up and killed Dram. Cyrus took up Dram's dagger and used it to break his fall off the airship as it ripped through the fabric. He landed safely as the airship exploded, and the Soul Sword landed at his side.[1]

Cyrus then met with Iszara after the victory. She was crowned the new governor of Stros M'kai, but still negotiated with the Empire in order to have the island treated better, having it become an autonomous vassal-state.[1]

It is unknown what happened to Cyrus after the events of Stros M'kai, but he did return to do some mercenary work.[1] His life remained as a tale by many sailors and pirates, and a hero to the Crowns.[5]

According to one such legend, Cyrus set sail upon his ship The Carrick with a crew of men in search of a long lost temple on the remnants of Yokuda and the famed "Glass Opal of Nogru". There he supposedly encountered and fought with the very chimeri God-King of Morrowind himself Vivec, ultimately to a stalemate.[6]

Cyrus became a legend at least among the inhabitants of the pirate ship in Oblivion’s Imperial City Waterfront docks; the pirates can be heard singing songs about Cyrus.confirmation needed

A Cyrus figurine which could be obtained by pre-ordering The Elder Scrolls Adventures: Redguard.

Cyrus sees his face on the preserved body of A'Tor in the Pool of Mysticism.

The hound of Clavicus Vile Barbas taking on Cyrus' appearance. 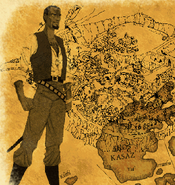 From loading screen
Add a photo to this gallery

Retrieved from "https://elderscrolls.fandom.com/wiki/Cyrus_(Redguard)?oldid=3087408"
*Disclosure: Some of the links above are affiliate links, meaning, at no additional cost to you, Fandom will earn a commission if you click through and make a purchase. Community content is available under CC-BY-SA unless otherwise noted.