View source
watch 02:58
No Man's Sky Update - The Loop
Do you like this video?
Play Sound 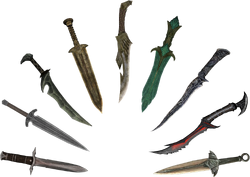 For other uses, see Dagger.

Dagger is a light, One-Handed weapon with a short blade and hilt in The Elder Scrolls V: Skyrim. Although they have the lowest damage and shortest reach of any other weapon in their respective weapon sets, they swing the fastest, consume the least amount of stamina, and have the highest sneak attack multiplier.

"Ah, the sneaky type, eh? I think we can fix you right up."
―Eorlund Gray-Mane[src]

Even though daggers do not do as much damage per hit as other One-Handed weapons like the Sword, Mace, or War Axe, the dagger's attack speed is faster, allowing the wielding character to be more nimble and making the dagger a very suitable weapon for the Thief.

Since the dagger has a shorter reach than most other weapons, it is suitable for fighting in close quarters and avoiding hitting friendly characters or creatures accidentally. Of course, because of their low damage, daggers are best used when dual-wielded, or in conjunction with another, stronger weapon or spell.

When dual wielding daggers with the Assassin's Blade perk and Shrouded Gloves, the daggers sneak attack can do a total of 30x damage.

The dagger, being the smallest of the wield-able weapon, is the weakest one to use for blocking, since weapons larger than the blocking weapon will force damage through, i.e. a Greatsword will easily penetrate a dagger's block, although some damage is still absorbed by the dagger.

Most daggers have an attack Speed of 1.3 and a maximum Reach of 0.7. These two statistics are consistent for all daggers regardless of material; therefore, they are not included in the table below.

Deutsch Español Français Polski
*Disclosure: Some of the links above are affiliate links, meaning, at no additional cost to you, Fandom will earn a commission if you click through and make a purchase. Community content is available under CC-BY-SA unless otherwise noted.
Advertisement