For other uses, see Dagoth Ur.

"What a fool you are. I'm a god, how can you kill a god? What a grand and intoxicating innocence. How could you be so naive? There is no escape. No recall or intervention can work in this place. Come, lay down your weapons, it is not too late for my mercy."
―Dagoth Ur[src]

Dagoth Ur, known as Voryn Dagoth in life,[1] and whom Vivec would later come to call The Sharmat,[2] was a powerful Chimer lord and Lord High Councillor to House Dagoth, and is the main antagonist of The Elder Scrolls III: Morrowind.

Voryn Dagoth was born into the Great House Dagoth. Accounts of his early life are few, but it is known that he did later in life become the Lord High Councillor of the house and a retainer to Indoril Nerevar.[3] After the defeat of the Nords at the Battle of Red Mountain, the Chimer and Dwemer created an alliance known as the First Council formed by Nerevar and Dumac, the king of the Dwemer in Morrowind. The First Council lasted for centuries[4] until Voryn, through unknown means, claimed to have discovered that the Tonal Architect, Kagrenac had found the Heart of Lorkhan, and that the Dwemer would use the power of the Heart to create a giant machine known as the Numidium to use against the Chimer.[5] Voryn, along with Nerevar, Vivec, Nerevar's wife Almalexia, and Sotha Sil were the only ones before Kagrenac to learn about the Heart.[5] The Daedric Prince Azura later confirmed Voryn's claims and Nerevar declared war on the Dwemer, culminating in the race's disappearance at Red Mountain.[5]

After the defeat of the Dwemer, the artifacts Sunder, Keening, and Wraithguard fell into the hands of Nerevar, who had to decide what to do with the tools. Voryn urged the destruction of the tools while Nerevar convened with the Tribunal and Azura.[5] When Nerevar and the Tribunal returned to lock away the tools, Voryn refused to give them up saying that he was entrusted with keeping them safe.[6] Unknown to Nerevar and the Tribunal, Voryn had experimented on the tools and the Heart and had managed to steal its divine energy.[7] Voryn now called himself Dagoth Ur from that point on, though other sources claim that Nerevar coined the name.[6] Nerevar and the Tribunal's guards fought and drove off Dagoth Ur, who was thought to have died.[1][7] Nerevar was said to have died from his injuries fighting Dagoth Ur, though the cause of Nerevar's death is often disputed.[5] Other accounts suggest it was the Tribunal who killed Nerevar, but only after he had vowed along with the Tribunal to never use the tools.[5]

The Tribunal took possession of the tools, and after some time, Sotha Sil managed to find a way to become gods by using the tools. The Tribunal traveled to Red Mountain and used Kagrenac's tools on the Heart of Lorkhan, using its power to attain immortality.[7] For breaking their promise to never use the tools, Azura appeared in anger, turning the Chimer into the Dunmer and prophesying that Nerevar would be incarnated and curse them for their deeds.[6] Dagoth Ur, however, managed to maintain a connection to the Heart through unknown means and managed to stay alive and immortal, although temporarily non-corporeal and presumed to be dead by most.[7]

The Birth of Dagoth Ur[]

In 2E 882, the Tribunal journeyed to Red Mountain to renew their god-like powers. However, by that time, Dagoth Ur and his House had been reborn in new bodies that more than matched the Tribunal's power.[7] Unable to enter the Red Mountain to renew their powers, the Tribunal grew weaker while Dagoth Ur grew more powerful as a result of being exposed to the Heart for so long.[7] During this time, Almalexia and Sotha Sil, in a vain attempt to regain their powers, lost Keening and Sunder to Dagoth Odros and Dagoth Vemyn, only surviving after Vivec saved them.[8] Dagoth Ur began to spread the Blight and Corprus diseases by powerful and unnatural ash storms from Red Mountain,[9] beginning a complex plan to conquer Morrowind and all of Tamriel with the second Numidium, Akulakhan.[7]

Dagoth Ur's main goals were to:

Dagoth Ur's first phase of his plan was to secure Red Mountain against Tribunal intruders and deny the Tribunal's access to the Heart, weakening the Temple and the three tribunes while claiming the land of Red Mountain for the creation of Akulakhan. A large part of the plan was to keep the construction of Akulakhan a secret from the Temple and Tribunes.

The Tribunal could never defeat Dagoth Ur due to two things: the first was that every time the Tribunes would invade Red Mountain and "kill" Dagoth Ur, the power of the Heart of Lorkhan would always revive him.[8] The second reason was that the Tribunal had to maintain the Ghostfence to keep Dagoth Ur's minions from invading Morrowind.[7]

"This is the end. The bitter, bitter end."
―Dagoth Ur[src]

In 3E 427 a prisoner matching the description of the Nerevarine was sent to the island of Vvardenfell by Uriel Septim VII to investigate complaints of disturbances in the region. After it was revealed in the Cavern of the Incarnate that this person was Nerevar reincarnated, they obtained Wraithguard, recovered the other tools of Kagrenac and met with Dagoth Ur in Red Mountain. There, they severed the Heart of Lorkhan from the mortal plane by using the tools, and without the Heart to sustain them, Dagoth Ur and his Ash Vampire brothers perished, and Akulakhan was destroyed. By doing this, the Nerevarine ended the Blight and Corprus diseases, along with the threat of House Dagoth. This action also caused the Tribunal to become mortal.[9]

Dagoth Ur could send messages in dreams and was able to make people serve him.[9] It was also said that he could speak through the mouths of his minions. He was a powerful mage, with long lethal claws. Only by destroying the Heart of Lorkhan was the Nerevarine able to defeat him.[10]

Dagoth Ur maintained the honorable ceremonies notable to his house as he allowed the Nerevarine to deliver the first hit when they battled.[11] When asked by the Nerevarine on how he justified his crimes he replied that he accepted the responsibility of leadership and that Morrowind could not be liberated from the Empire without bloodshed and that he viewed his actions as just and noble.[11] It was said that Dagoth Ur had adopted the views and motivations of the Tonal Architect Kagrenac.

The Citadels of the Sixth House[]

With the help of Kagrenac's tools, Sunder, Keening and Wraithguard, the Nerevarine journeys to Red Mountain, to defeat Dagoth Ur and save Morrowind.

Note: Dagoth Ur has two sets of statistics, depending on his location.

The following is a list of Dagoth Ur's abilities, attributes and spells:

In Akulakhan's Chamber, Ur has the following extra abilities:

In Dagoth Ur, Facility Cavern, Ur has the following attributes:

In Akulakhan's Chamber, Ur has the following attributes:

"Strange. This outcome I did not foresee. That you would come unprepared."

come unprepared "This is the place of destiny. And destiny may only be shaped by the holder of Kagrenac's Tools. I do not know what you think to accomplish. But raise your hand against me, and I shall destroy you."

(If approached again)
"Until I see you better prepared, we have nothing to discuss."

In The Elder Scrolls: Arena, a simple map of the continent of Tamriel is shown, including the island of Vvardenfell. The center of this island is a volcano which is referred to only as Dagoth-Ur. However, in The Elder Scrolls III: Morrowind, the volcano is referred to by its inhabitants almost exclusively as Red Mountain. This discrepancy is explained by the fact that Dagoth Ur resides inside of Red Mountain for most of his life. Thus, in local legend, the mountain is sometimes referred to by this name.

Note: It is commonly accepted that the name Dagoth Ur should properly be used to refer to the character, and the volcano should be referred to as Red Mountain. However, if the name has the hyphen, Dagoth-Ur, it is referring to the volcano.

Dagoth Ur in the Facility Cavern.

Dagoth Ur in Akulakhan's chamber. 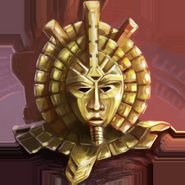 Dagoth Ur in The Elder Scrolls: Legends. 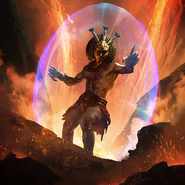 Card art of Dagoth Ur in The Elder Scrolls: Legends.

Dagoth Ur card from The Elder Scrolls: Legends.

Notice: The following are unlicensed references. They are not copyrighted by a ZeniMax Media company, but can still be considered part of The Elder Scrolls lore and are included for completeness.
Español Français Bahasa Indonesia Italiano Nederlands Polski Português Русский Українська
*Disclosure: Some of the links above are affiliate links, meaning, at no additional cost to you, Fandom will earn a commission if you click through and make a purchase. Community content is available under CC-BY-SA unless otherwise noted.
Advertisement