The Citadels of the Sixth House
Crosier of St. Llothis the Pious

For other uses, see Dagoth Ur.

Dagoth Ur is a Dwemer ruin found at the center of Red Mountain region in The Elder Scrolls III: Morrowind. It contains the Akulakhan and the Heart of Lorkhan, and serves as the location for the end of the main questline.

The ruin, consisting of six sublocations, is the headquarters of the Sixth House and is named after its leader, Dagoth Ur. It is located around the main vent of the Red Mountain volcano, in Vvardenfell and due north of Ghostgate. It is the final destination of the final quest the Nerevarine must undertake during the main questline. With the exception of the Inner Tower, all of the sublocations form a linear path: the Outer Facility leads to the Inner Facility, the Inner Facility leads to the Lower Facility and so on.

The entrance is blocked by a round stone shield, which only opens once the crank on a pipe that just south of the doorway is activated.

In addition to the residents and various loot containers, there are lootable dead bodies in the Outer and Inner Facilities.

This section is the citadel's entrance, it leads to the Inner Facility. There are only five enemies, which are three leveled ash creatures and two ash ghouls, named Dagoth Ienas and Dagoth Vaner.

The Inner Facility has doors to the Inner Tower and the Lower Facility and the facility itself is a long intertwining corridor with two rooms. Dagoth Drals and Dagoth Rather can be found here, along with a greater bonewalker.

This area leads to the Facility Cavern and has a simple layout of three small rooms, one after the other. The ash vampires Dagoth Muthes and Dagoth Gilvoth can be found here. Gilvoth possesses the Blood Ring which can be looted from his body.

This cavern is where the first encounter with Dagoth Ur happens during the main quest. The Heart Ring can be found on the floor, lying next to the entrance to Akulakhan's Chamber, but it is hidden behind a boulder that only opens once Dagoth Ur is defeated and Azura's Spirit listened to.

This is a very large cavern with several levels, accessible by ledges that go around the area. Its lowest section is entirely flooded by lava. In the center of the cavern stands a giant unfinished humanoid golem, called Akulakhan, the second Numidium. The Heart of Lorkhan is attached to its empty stomach. This is where the Nerevarine encounters Dagoth Ur for the second and final time.

The Citadels of the Sixth House[edit | edit source]

Travel to the facility on confront Dagoth Ur himself. Enter the heart chamber with Keening, Sunder, and Wraithguard, and strike the Heart of Lorkhan. This will destroy the Akulakhan, and end the threat of House Dagoth. 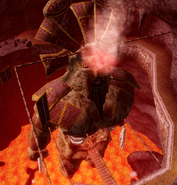 Notice: The following are unlicensed references. They are not copyrighted by a ZeniMax Media company, but can still be considered part of The Elder Scrolls lore and are included for completeness.
Retrieved from "https://elderscrolls.fandom.com/wiki/Dagoth_Ur_(Morrowind)?oldid=3099100"
*Disclosure: Some of the links above are affiliate links, meaning, at no additional cost to you, Fandom will earn a commission if you click through and make a purchase. Community content is available under CC-BY-SA unless otherwise noted.