watch 01:27
'The Elder Scrolls Online: Dark Anchors' Trailer
Do you like this video?
Play Sound

For the card in The Elder Scrolls: Legends, see Dark Anchor (Legends).

Dark Anchors are enormous interplanar machines that Molag Bal has created to merge Tamriel with his own Daedric Plane of Coldharbour. The purpose of the Anchors are to pull Tamriel into Coldharbour, thus merging the two realms together into a single, nightmarish hellscape. They will spawn periodically across Tamriel in set locations called Dolmens, which are in each subregion of Cyrodiil and every Alliance zone. All dolmens are protected by a large number of Daedric guardians that will appear continuously, until the Anchor is destroyed by deactivating all 5 Anchor Pinions, and killing a powerful Daedra once 4 of the 5 pinions have been deactivated.

It is possible for higher level players to defeat the Daedric protectors and return the Anchors by themselves, however it is recommended to battle them in parties, as they will be tough competitors.

Dark Anchors have a very similar use to Oblivion Gates, and they are summoned by Worm Cult Battlemages.

Molag Bal yells when he deploys the anchor:

When he summons the lieutenants:

When he summons the generals:

After the bosses' defeat:

And after the anchor is destroyed:

There are several rituals used to summon a Dark Anchor, they are recited by Worm cultists periodically:

The Worm cultists will then either be sacrificed to Molag Bal or become alerted and attack the Vestige.

Reward for each destroyed Dark Anchor is distributed evenly:

A Dark Anchor at a distance.

Full view of a Dark Anchor

Underneath a Dark Anchor.

The base of the anchor

A Dark Anchor being destroyed

Destruction Dark Anchors can cause. Daedric Titans can be seen in the foreground and background. 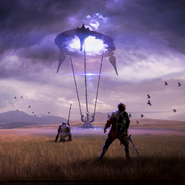 Dark Anchor in The Elder Scrolls: Legends
Add a photo to this gallery

Retrieved from "https://elderscrolls.fandom.com/wiki/Dark_Anchors?oldid=3158529"
*Disclosure: Some of the links above are affiliate links, meaning, at no additional cost to you, Fandom will earn a commission if you click through and make a purchase. Community content is available under CC-BY-SA unless otherwise noted.