Main quest
Daughter of Giants is part of the main quest in The Elder Scrolls Online.

The Prophet has contacted the Vestige to come to the Harborage to help Lyris Titanborn escape from Coldharbour.

The Vestige has been contacted by the Prophet, who asks to meet him in the Harborage in order to save Lyris Titanborn from Coldharbour. Once in the Harborage, find and speak to the Prophet. His response will be mostly cryptic, but will eventually say that he has located Lyris in Coldharbour. She was placed there after taking his place in The Wailing Prison while attempting to save him, and was later moved to The Foundry of Woe to work for Molag Bal. He will then open a gate for the Vestige to enter.

Enter the gateway to Oblivion and follow the marker to find Lyris, who will be standing by a large table. Once spoken to, she will say that she wishes to leave Coldharbour, but explains that she is unable to, due to everything being taken away from her and destroyed into fragments. All of the fragments have been locked away in different parts of the Foundry. The Vestige will need to retrieve all of these fragments in order to save Lyris.

"Her mind and soul are already ours! Abandon your pathetic rescue!"
―Manifestation of Regret[src]

Advance into the Foundry to help Lyris with her regret. She has deep regrets about leaving home and never resolving issues with her father. After approaching the graves of her parents, the ghost of Lyris's father, Gjalder, will appear. He will tell the Vestige how his spirit was brought to Coldharbour, and how the Daedra forced him to experience his murder repeatedly. Gjadler will explain that the Daedra are using him to prevent Lyris from leaving Coldharbour, who blames herself for his death.

After advancing further into the Foundry and into Clannfear Roost, the projection of Abnur Tharn will appear and tell Lyris that he is trying to help her. Behind him is Lyris' Axe on a small mound. Once approached, Abnur will materialize into a Clannfear. Once Lyris has received her axe, she will then use it to destroy the stone wall blocking the passage.

Advance further into the Foundry, which will contain multiple Ogrim. Enter the Prison of Echoes and investigate the chamber. Within the middle of the room will be a projection of Sai Sahan, who will say that he is being tortured for the location of the Amulet of Kings. He will then disappear, to which Lyris will tell the Vestige that they should speak to the Prophet for advice on how to help Sai escape.

After entering the Crucible of Terror, Lyris will begin to experience feelings of loneliness and fear. Her Manifestation of Terror, a Watcher, will appear. The Vestige will need defeat the Watcher in order for Lyris to reclaim her memories and escape Coldharbour.

Once the Vestige is back in the Harborage, they will need to speak to the Prophet for advice. One can choose to tell him about Sai Sahan and Abnur Tharn, to which he will say that Sai Sahan needs to be set free before Mannimarco, his torturer, forces him to reveal The Amulet of King's location, and that it is strange for Abnur Tharn to go against Mannimarco by helping Lyris. The Prophet will then reward the Vestige, completing the quest. 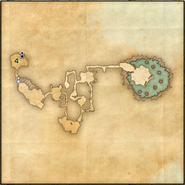 Retrieved from "https://elderscrolls.fandom.com/wiki/Daughter_of_Giants?oldid=3145902"
*Disclosure: Some of the links above are affiliate links, meaning, at no additional cost to you, Fandom will earn a commission if you click through and make a purchase. Community content is available under CC-BY-SA unless otherwise noted.