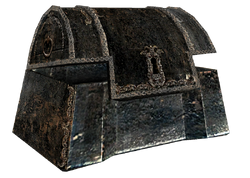 Dawnguard Caches are locked strongboxes located in various points around Skyrim. They contain various items ranging from potions, to apparel, to gold.

The strongboxes do not appear in the game world until the orders that describe their locations are obtained and read. They can be opened with the Dawnguard Cache key, or they can be picked like any other locked container. They are usually placed in areas that keep them relatively hidden, making them difficult to find, even with knowledge of their location.

The locations to Dawnguard Caches can be found on orders given to Dawnguard field agents. The orders request that the agent restock several listed supply caches in the area that the novice is found in. The agents also carry keys to the caches. They cannot be engaged in conversation or aided in their orders, so they need to be either pickpocketed or killed to get their orders and key.

Near Stendarr's Shrine
Add a photo to this gallery

Near the Solitude Sawmill

Fallen tree near Volskygge
Add a photo to this gallery

At the foot of the pier

North of Azura's shrine
Add a photo to this gallery

See more discussions >
Retrieved from "https://elderscrolls.fandom.com/wiki/Dawnguard_Cache?oldid=2915309"
*Disclosure: Some of the links above are affiliate links, meaning, at no additional cost to you, Fandom will earn a commission if you click through and make a purchase. Community content is available under CC-BY-SA unless otherwise noted.