"We bid you welcome to the City-State which greets the sun as it begins its journey, Dawnstar..."
―Description in Arena[src]

For the mobile game, see The Elder Scrolls Travels: Dawnstar.

Dawnstar or Danstrar is one of the nine-major cities in the province of Skyrim, being the capital of the region of the Pale. Dawnstar is a bustling trading town that produces all sorts of produce, ranging from fish to smithing materials. It is where the sun greets you as it begins its journey, hence the name.

Dawnstar is situated along the Sea of Ghosts, making it a prominent trading stop between the city-states of Windhelm and Solitude, both located on the edge of Skyrim. Dawnstar's ports give ships coming from abroad to send their produce to the wilds of Central Skyrim. Dawnstar, on the mainland, is situated in a frozen sea of snow, with a stretch of road to the boreal forests of the southern Pale, though Dawnstar's geography caters to the harsh environment. Dawnstar city is built within an opening situated on the Sea of Ghosts, where the northern mountains begin and continue onto Winterhold. This pocket in the mountain range is where Dawnstar is situated, with a path to the coast. The people of the city have established several watchtowers along this area. South of the city, overlooking the entire domain is Nightcaller Temple, formerly called the Tower of Dawn. To the east, the Dawnstar Lighthouse guides passing ships to Dawnstar, though it is not anything to write home about. One of Dawnstar's trades is mining, and so the city host two mineshafts, both of which produce Iron and Quicksilver, which are commonly used materials in weapons.

Dawnstar city is split into an upper and lower level. The Upper Level contains the main gate, leading into the Skyrim wilderness, eventually taking travelers to nearby townships such as Bardmont and Dunstad Grove. Around the main gate are several points of interest. On certain occasions, the Khajiiti Caravan or other traveling merchants would settle outside the gate. Hidden behind some stone is a hidden entrance to the long-forgotten Dawnstar Sanctuary, which was initially used by the Dark Brotherhood as their headquarters in the Pale. But upon entering the gate, you are greeted to the Dawnster Upper Level, which contains a view of the Dawnstar Bay and the Lower Level. A path north of the entrance leads into the harbor, and the road to the east leads to the rest of the Upper Level. Along the way are several Dawnstar businesses including the Windpeak Inn and the Iron-Breaker Mine, the source of Dawnstar's Iron deposit. In the middle of the Upper Level is the White Hall, which is the seat of power in Dawnstar, home to the local Jarl. The path eventually revolves around to the Lower Level, where many of the residents have inhabited. Houses surround the bay, as people move to and fro with the trade. To the west is Quicksilver Mine, which is the home of Dawnstar's Quicksilver deposit. Continuing onto the beach in the Lower East will lead you out of the city, where you can eventually discover the main entrance to the Dark Brotherhood Sanctuary and a path to the Lighthouse. Between the White Hall and the Dawnstar Barracks is a faded path that leads to the main road and the Tower of Dawn.

With the death of Reman Cyrodiil III in 1E 2920, his Potentate, Versidue Shaie had named the end of the first era, bringing about the second era, and with much controversy. The various vassal kingdoms through the Empire had begun to rebel against the Potentate, unwilling to pay taxes and to disrupt Imperial garrisons throughout the realms. It would cause serious problems for Shaie, and it reached its pinnacle with the destruction of his fortress in Dawnstar. Because of this transgression, Versidue Shaie had gathered the Elder Council in the township of Bardmont, to hold the Council of Bardmont. Shaie would take on a totalitarian role, establishing a universal martial law all over the Empire. What followed was thirty-seven years of bloody and gruesome conflicts that the continent had yet to withstand. Shaie's Grand Army had crushed the various Kingdoms. At that point, the only people who benefitted at this time were criminals. Eventually, Shaie would be assassinated for the years of conflict.[2][3]

The Eastern Kingdom & the Ebonheart Pact

One of Versidue Shaie's allies was High King Logrolf, the leader of Skyrim. At one point, Logrolf was assassinated by an unknown assailant. Naturally, the next of kin would take the position of High King and so the Crown of Verity was passed onto Freydis. Though this did not come without its controversy, Jarl Svartr of Solitude had accused Freydis of being an illegitimate heir to the throne and that he is the better candidate for the throne. This issue caused a schism in Skyrim that chose between Freydis and Svartr. The Crown of Verity had chosen Freydis to be the High Queen, and so the Nords of the Old Holds had started to follow Freydis. A Moot was held between the Jarls of Skyrim, and in the end, Svartr was chosen to be the High King, and so the Nords of West Skyrim had started to follow Svartr. Skyrim was split into two Kingdoms and Dawnstar sided with East Skyrim. Several years later, Jorunn the Skald-King had created the Ebonheart Pact in the aftermath of the Second Akaviri Invasion in 2E 572. Dawnstar's forces were a part of the Nordic defense in the Invasion as well as the Ebonheart Pact.[4][5]

Dawnstar during the Imperial Simulacrum

During the Imperial Simulacrum from 3E 389 to 3E 399, Emperor Uriel Septim VII was imprisoned along with Talin Warhaft in the Deadlands by Jagar Tharn. Tharn planned for months to capture the throne, and he was able to achieve so in ten years. Tharn had a powerful weapon called the Staff of Chaos, and he split it into nine pieces and scattered them across Tamriel, the staff was the only thing keeping Uriel Septim and Warhaft in Oblivion. A warrior escaped his clutches and traveled all corners of Tamriel to retrieve the missing pieces. The hero was known as the Eternal Champion, and he assembled the staff and defeated Jagar Tharn at the Imperial Palace. The Eternal Champion had at one point visited the city of Dawnstar in their quest to recover the pieces. The city of Dawnstar was under the rule of King Ulrarne.[6]

The Alliance of Dawnstar & Solitude

During the waning years of the third era, the Kingdom of Dawnstar was under the leadership of Queen Macalla. It was at this time, the northern kingdoms of Skyrim were undergoing a renaissance and territories were uniting. King Thian of Solitude married Macalla to establish an alliance between the two city-states. Both Solitude and Dawnstar would expand their boundaries and into former Imperial fiefdoms, ones that were captured by Uriel Septim V during his reign in 3E 271. One of these locations was Roscrea, an island fiefdom situated north of Solitude, in the Sea of Ghosts. Roscrea was just the stepping stone for future expeditions for the alliance. The two would continue this alliance into the fourth era. It is unknown how long this relationship lasted since it was never mentioned again.[7]

The Waking Nightmare over Dawnstar

During the Skyrim Civil War in 4E 201, the city-state of Dawnstar was ruled by Skald the Elder, who was an old and arrogant man, one of the most staunch supporters of the Stormcloaks. Skald Felgief was more occupied with the Civil War rather than protecting his own people, which becomes evident with the recent situation. The Tower of Dawn was revamped into a temple dedicated to Vaermina, and so the Skull of Corruption was stored within the depths. Because of this, the people of Dawnstar were inflicted with nightmares, torturing them every night. A Priest of Mara, Erandur traveled to Dawnstar to help them with the problem. Erandur called upon the help of a mysterious traveler to deal with the threat. A strange gas called the Miasma had spewed out from the Nightcaller Temple and afflicted the Vaermina cult and the Orcish invaders. Both Erandur and the traveler fought through waves of these cultists and Orcs, eventually finding the Skull of Corruption in the Inner Sanctum. The fate of both the Staff and Erandur are unknown, but Dawnstar's nightmare had ended, and the city was saved.[8]

The Dark Brotherhood's resurgance in Dawnstar

Around the same time, the Dark Brotherhood had taken refuge in the long-abandoned Brotherhood Sanctuary in Dawnstar, when their original sanctuary in Falkreath Hold was burned to the ground by the Penitus Oculatus. The Keeper of the Night Mother, Cicero had fled to this sanctuary when he attacked Astrid, leader of the Falkreath Chapter before the sanctuary's raze. The Brotherhood had severely injured Cicero, who fled into the wilderness. His fate is currently unknown. The very few survivors of the Falkreath Sanctuary had resided in the Dawnstar Sanctuary, along with the Night Mother. The outcome of the Dawnstar Chapter is currently unknown. Before their occupation, an Udefrykte had lived in the icy caves until it was killed by the Brotherhood.[9][10]

The Tale of Dawnstar & the Starfrost

At some point, Dawnstar was governed by Governor Cyril Vinticae. During his reign, Dawnstar was besieged by the Ice Tribes, a group of humanoid creatures that lived in the area. Four champions were residing in Dawnstar, one of them was the traitor that let the Ice Tribes enter the city. Unable to determine the traitor, Vinticae banished all four of them to the wilderness. To uncover them, Vinticae hired an unknown hero to traverse the Pale in order to meet with each of the four, and determine who the traitor was. The Traitor's identity is unknown, but they were brought to justice in Dawnstar. But the Ice Tribes started to invade Dawnstar again with their powerful ally, the Gehenoth Thriceborn and the traitor. With the power of the Starfrost given from Vinticae, the hero was able to defeat the Gehenoth and saved the exile post of Dawnstar.[11] 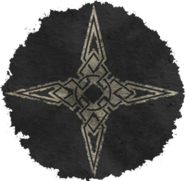