For the list of available public dungeons, see Public Dungeon.

"No one believed the old ouster Del when he staggered into Vulkhel Guard and claimed he'd found a huge deposit of lapis lazuli in the hills, but it turned out to be true, and now Del's Claim is one of the most profitable mines on Auridon."
―Del's Claim Loading Screen

Del's Claim is a dungeon found on Auridon, the second largest of the Summerset Isles.

Del's Claim used to be a mine, but the Veiled Heritance attacked, killing anyone inside. It was later used as a base of operations for the group according to Del's Claim. The mine is located nearby the settlement of Vulkhel Guard. 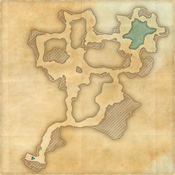 Retrieved from "https://elderscrolls.fandom.com/wiki/Del%27s_Claim?oldid=2199296"
Community content is available under CC-BY-SA unless otherwise noted.