During the Great War, Delphine was an Agent of the Blades. By then, she was a high-priority target to the Third Aldmeri Dominion. Before the war, Delphine orchestrated several attacks on the Dominion during her stay in their Territory, which consists mainly of both the Summerset Isles and Valenwood. By the time she was discovered, the first purge against the Blades had begun, fortunate for her; she was recalled to Cyrodiil, avoiding the Dominion's wrath. When the Great War had commenced, Delphine was able to evade several assassination attempts on her life, until she had ultimately escaped the Dominion, into the province of Skyrim, where she resided in the quaint hamlet of Riverwood, near the city-state of Whiterun. She would evade the Thalmor for roughly over thirty years, waiting for the call to arms.[1][2]

During the Skyrim Civil War in 4E 201, Delphine resides in the township of Riverwood, taking the position of Innkeeper at the Sleeping Giant Inn, and working alongside Orgnar, a Nordic Commoner that was a resident in Riverwood. It is unknown how long the two have worked with each other. During her time in Riverwood, she garnered allies throughout the Whiterun Hold, including Farengar Secret-Fire, the Court Wizard of Whiterun. The two would attempt to uncover the various Dragon Burial Mounds scattered throughout the province of Skyrim. With the help of an estranged warrior, the Dragonstone of Bleak Falls Barrow was recovered, the contents of the stone would be remade into the Map of Dragon Burials. When news that the Last Dragonborn had revealed themselves, Delphine sought a way to garner their attention, she would traverse the ruins of Ustengrav and retrieve the Horn of Jurgen Windcaller, knowing that the Dragonborn would attempt to take it. Her plan succeeded and the Last Dragonborn headed to Riverwood, meeting with Delphine.[3][4]

Being naturally unconvinced, Delphine traveled with the supposed Dragonborn to the sacred forest of Kynesgrove, to slay the resurrected Dragon known as Sahloknir, who was slain in the area many years ago. In the aftermath of the battle, the warrior absorbed the Dragon's soul, proving the fact that they are the Dragonborn. And so the two began to uncover the person responsible for this Dragon Crisis. Delphine's first idea was the Thalmor, so she tasked the Dragonborn with infiltrating the Thalmor Embassy near the city-state of Solitude. However, it was revealed that the Thalmor were not responsible. To uncover more information, the two decided to locate Esbern, another rogue member of the Blades, living out in the city-state of Riften. With Esbern's help, the duo learned that the prophecy foretold in Alduin's Wall had begun, revealing that Alduin, the Nordic God of Destruction was responsible for the Dragon Crisis. In the end, the Last Dragonborn was able to vanquish Alduin within the depths of Sovngarde.[5][6][7][8]

Before the Blades were made into the Emperor's personal bodyguard, they were originally dragon hunters that served the Dragonborn, who is considered the ultimate dragonslayer. Delphine took it upon herself to re-establish the Blades, not only as the Grandmaster but for their initial purpose. Before meeting Delphine, the Last Dragonborn was acquainted with the Greybeards, who despise the Blades and vice versa. When the existence of Paarthurnax was revealed to the Blades, the Last Dragonborn was tasked to eliminate the dragon, knowing that the elder dragon was considered the Dragonborn's master in the Thu'um. If the Dragonborn had killed Paarthurnax then they would be disowned by the Greybeards, but if they let Paarthurnax live, then the Dragonborn would be considered an enemy of the Blades. Delphine gave the Dragonborn this ultimatum, and it is unknown whether it was carried out or not. Regardless, the Blades grew, taking in newer members and operating out of Sky Haven Temple, amidst the Karth River. What became of Delphine's Blades is currently unknown.[9][10] 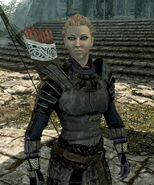 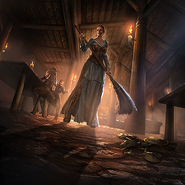