For other uses, see Deshaan.

Deshaan is the southern zone of Morrowind in The Elder Scrolls Online bordering Shadowfen in Black Marsh as well as Stonefalls to the north. Its fertile, ash-enriched plains surround the Tribunal Temple, the center of Dunmeri culture. A significant portion of Ashlanders can be found in the south and center of the zone, such as in Muth Gnaar and Ghost-Snake Vale.[1]

"The fertile valleys of Deshaan are home to lush fungal forests, deep kwama mines, and broad pastures where netches and guar graze. But all pales before the magnificence of Mournhold, home of the Tribunal and capital of the Ebonheart Pact."
―Loading screen[src]

The city of Mournhold is located in Deshaan, the center of Dunmeri culture, the location of the Tribunal Temple, and the capital of the Ebonheart Pact, as well as the capital of Morrowind.[2]

An Akaviri army entered Deshaan in 2E 572 in the hopes of sacking Mournhold. However, they were met by an army led by Almalexia herself and were driven back to Stonefalls. As the battle raged on, a Nord army led by Wulfharth the Ash-King and Jorunn the Skald-King caught up with the invaders and hoped to take revenge on the Akaviri for sacking the city of Windhelm. This was the first time a Nord army had entered Morrowind since the Battle of Red Mountain.[3]

A fourth army of Argonian Shellbacks led by a trio of Argonian battlemages entered the fray, and the three combined armies drove the Akaviri led by Ada'Soom Dir-Kamal into the sea near the city of Ebonheart, where they drowned by the thousands.[4]

The following are locations accessible in Deshaan and, with the exception of unmarked locations, are discoverable on the map. Points of Interest serve as locations with unique side quests, while cities serve as the centralised areas with multiple sublocations and act as a hub for services and merchants. Explanations of the types of locations are provided in the main locations page.

Sixteen Skyshards can be found in Deshaan totalling in five skill points with one left over. The zone guide provides clues as to the location of each Skyshard, but many can be found simply by exploring and watching for the distinctive pillar of light they emit.

Thirty-two books that are a part of Shalidor's Library can be found in Auridon and added to the collection. Books that have already been found in other zones will already be marked as completed in the zone tracker.

A wayshrine in Deshaan. 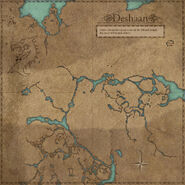 A group of waterfalls at Lake Amaya Basin.

Dansk Deutsch Español Français Русский Svenska
*Disclosure: Some of the links above are affiliate links, meaning, at no additional cost to you, Fandom will earn a commission if you click through and make a purchase. Community content is available under CC-BY-SA unless otherwise noted.
Advertisement