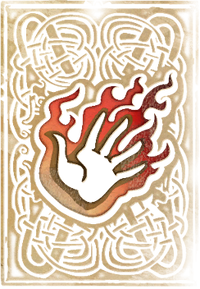 Destruction is a magic arts skill that imbues the Hero with the ability to cast destructive spells that include fire spells, frost spells, shock spells, and weakness to fire, frost, and shock spells. It also allows the Hero to reduce damage from other magical attacks. The Skingrad Mages Guild specializes in Destruction. It is the most commonly used magic type for mages to defend themselves with.

Fire, frost and lightning have flowed from your fingertips. You are now an Apprentice in Destruction magic and can cast Apprentice level Destruction spells.

Fire, frost and lightning have flowed from your fingertips. You are now a Journeyman in Destruction magic and can cast Journeyman level Destruction spells.

Fire, frost and lightning have flowed from your fingertips. You are now an Expert in Destruction magic and can cast Expert level Destruction spells.

Fire, frost and lightning have flowed from your fingertips. You are now a Master of Destruction magic and can cast Master level Destruction spells.

When the player's Destruction skill is 70 or higher, NPCs will say "There's a charge in the air! Been casting Destruction spells?"

Destruction is extremely useful. It helps raise Willpower, which in turn boosts magic regeneration. Many creatures in Oblivion are weak to either Shock or Fire damage. Destruction is the best way to take out multiple opponents. Spells can be made to affect a wide area hitting several opponents per spell.

One of the most useful spells in the game (although many consider it a form of "cheating") is to create a 100-point, 1-second Touch Drain Health spell. It costs very little to actually cast, and, until the character is around level 25, will instantly kill almost every enemy you encounter. Carry a back-up plan if using this, though, as some enemies are immune.

Retrieved from "https://elderscrolls.fandom.com/wiki/Destruction_(Oblivion)?oldid=3142208"
*Disclosure: Some of the links above are affiliate links, meaning, at no additional cost to you, Fandom will earn a commission if you click through and make a purchase. Community content is available under CC-BY-SA unless otherwise noted.