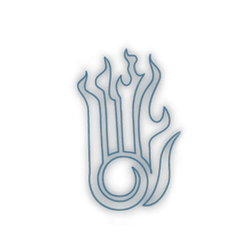 "The School of Destruction involves harnessing the energies of fire, frost and shock. This skill makes it easier to cast spells like Fireball, Ice Spike, and Lightning Bolt."
―The Elder Scrolls V: Skyrim[src]

Destruction is a skill in The Elder Scrolls V: Skyrim, and is one of the skills that falls under The Mage play-style. The Destruction skill is increased by damaging enemies with Destruction spells. Destruction spells serve as the main offensive for mages, as the majority of the spells in this school cause direct damage.

Destruction spells can be acquired by reading spell tomes bought from vendors or looted from chests and corpses. The tomes of these spells depict an open palm, circled in fire. In the College of Winterhold, Faralda is the Destruction Teacher and has a wide selection of Destruction spell tomes for sale.

Destruction is divided in three types of elements: Fire, Frost and Shock. Each has its own characteristics, costs and effects, as listed below.

Fire spells consume the least amount of magicka of the three types of Destruction spells. Fire spells travel at an average velocity and inflict damage on contact as well as over time. Most fire spells inflict a "burn" effect on enemies, which boosts damage from other weapons. Dark Elves are 50% resistant to this kind of spell, which can be helpful in fighting fire-breathing dragons. Fire spells also boil small amounts of water when cast at them. Fire spells can also ignite oil that is sometimes found spilled on the floor of dungeons, crypts, etc. Creatures (including the Dragonborn and their companions) standing in or passing through burning oil will take fire damage.

Frost spells consume an average amount of Magicka, but they travel at a slower velocity than shock spells. Frost spells slow the target's movement, while dealing damage to health and stamina. Nords are 50% resistant to this kind of spell, which can be an advantage when fighting frost-breathing dragons. Also, vampires resist between 25% and 100% (20% and 50% in Dawnguard) of frost damage, depending on the stage of vampirism.

Shock spells consume the most Magicka of the three types of Destruction spells, but its spell velocity is instant. Shock spell damage drains health and magicka, making it an ideal choice against mages. Only Bretons, with a 25% resistance to all magic, have an innate resistance to shock spell damage. Shock damage is not conducted by water.

The following is a list of books that raise the Destruction skill.

The following is a complete list of Destruction spells:

The following are Destruction spells that the Dragonborn can start with if the correct race is selected: 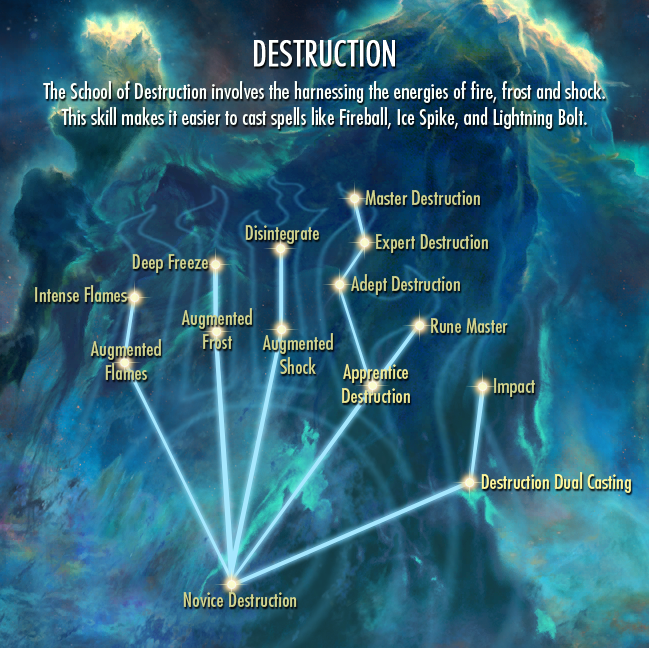 The following are the perks that become available to select as the skill is leveled up. 17 Perk points are required to max out the tree.

Deutsch Español Français Italiano Nederlands Polski Português Русский Українська
*Disclosure: Some of the links above are affiliate links, meaning, at no additional cost to you, Fandom will earn a commission if you click through and make a purchase. Community content is available under CC-BY-SA unless otherwise noted.
Advertisement