Brush of True Paint
Helm of the Crusader

"Dibella says: Open your heart to the noble secrets of art and love. Treasure the gifts of friendship. Seek joy and inspiration in the mysteries of love."
―Ten Commands: Nine Divines

Dibella is also known as the "Passion Dancer," "Our Blessed Lady."[2] She has also been referred to as the Queen of Heaven.[3]

The Kothringi, the indigenous humans of Black Marsh, are known to have worshipped Dibella in the name Dibe, alongside Mara and Kynareth, as one of the "mothers in the Around-Us."

They built a Temple of Dibella in the city of Gideon, which can be found during the Second Era.[4]

Dibella is the patron deity of the region of Tigonus,[5] and is popular among Redguard women.[6] Dibella is not universally accepted, only venerated by a select group known as "Forebears," who began to accept her into their pantheon under the Cyrodilic Empire.[7] The Order of the Lily was a knightly order dedicated to Dibella which protected her temples against its adversaries, such as the followers of Sanguine, the Daedric Prince of Hedonism.[8]

In the late Third Era, the House of Dibella was responsible for the administration of temples dedicated to Dibella in the province of High Rock, and the Order of the Lily was also active in the province at this time.[9]

Dibella is the patron deity of the regions of Koegria and Menevia, and is venerated as a member of the Bretony Pantheon.

The Nords of Skyrim acclaim Dibella as the Bed-Wife of Shor, and is considered a member of the Nordic Pantheon. In the Fourth Era, the practice of the Dibellan Arts was disapproved of in certain localities and could lead to ostracism.[10]

Cyrodiil's Chapel of Dibella resides in Anvil. Pilgrims of the Nine Divines begin their trek here. Prayers heard by Dibella within the chapel fortify Personality, through Dibella's Kiss. In the Third Era, several murders took place in the Chapel of Dibella, desecrating the shrine within. This led to the restoration of the Knights of the Nine and the collection of the artifacts of the Divine Crusaders.[11]

Two wayshrines dedicated to Dibella exist in Cyrodiil. One is located south of Chorrol, while the other is located west of the Imperial City.

The Brush of Truepaint was an artifact created from the hair of Dibella.[12] During the Third Era, a painter named Rythe Lythandas acquired the Aedric artifact. While in his possession, the Brush was stolen by a thief who entered one of Rythe's paintings and held him prisoner there. The Hero of Kvatch may have rescued him, using a special poison made from turpentine.[13]

Helm of the Crusader

The Helm of the Crusader was created by Dibella for Pelinal Whitestrake to aid in his battle against Umaril the Unfeathered.[11] Sir Amiel Lannus sought the relic at The Shrine of the Crusader in hopes of restoring lost honor to the Crusaders. Unfortunately, he died in the endeavor. Before his death, he was shown a vision of the helm, which he recorded in his journal.[14] During the Third Era, the Hero of Kvatch received the helmet from Vanua on their quest to collect the lost relics of the Divine Crusader.[15]

"Come to me, Dibella, for without you, my words must lie dull and leaden without the gilding of grace and sagacity to enchant the reader's ear and eye."[16]

"Open your heart to the noble secrets of art and love. Treasure the gifts of friendship. Seek joy and inspiration in the mysteries of love."[17] 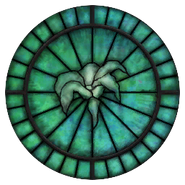 A statue in the likeness of the goddess in Markarth.

A statue of Dibella in Anvil.

Notice: The following are unlicensed references. They are not copyrighted by a ZeniMax Media company, but can still be considered part of The Elder Scrolls lore and are included for completeness.
Čeština Deutsch Español Suomi Français Italiano Polski Português Русский Українська
*Disclosure: Some of the links above are affiliate links, meaning, at no additional cost to you, Fandom will earn a commission if you click through and make a purchase. Community content is available under CC-BY-SA unless otherwise noted.
Advertisement