"Ancestral home of the Direfrost clan, this frozen castle has long been sealed to the outside world, its owners neither seen nor heard from in generations. Mountain storms rage above the castle walls, conjured up by some unknown malignant power."
―Loading screen[src]

Direfrost Keep is a group dungeon in the region of Eastmarch in The Elder Scrolls Online. 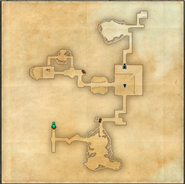 Retrieved from "https://elderscrolls.fandom.com/wiki/Direfrost_Keep?oldid=3036087"
*Disclosure: Some of the links above are affiliate links, meaning, at no additional cost to you, Fandom will earn a commission if you click through and make a purchase. Community content is available under CC-BY-SA unless otherwise noted.