The king or queen of the Aldmeri Dominion[1]
The Thalmor

Summerset Isles, Valenwood, and Elsweyr as of the Fourth Era

Not to be confused with Thalmor.

"The forces of the Dominion Military are the physical incarnation of the Glory of the Aldmeri Peoples, and as such must be respected by members of the tertiary races."
―Legate Calevarnel[src] 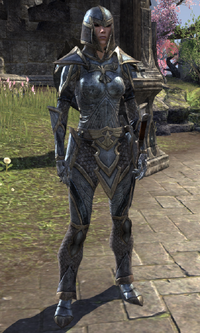 The Dominion army knows, and makes use of, the phalanx formation.[5] Individual Dominion soldiers are also known to use a combination of dirt tricks, subterfuge, and magic, according to the Daggerfall Covenant.[4]

Each race is also known to use a variety of different tactics in one-on-one combat. The Bosmer are known to attack from different sides or use bows and arrows to defeat their opponent.[4] Khajiit use both their claws and tails to achieve victory. If disarmed, Khajiit will use their razor sharp claws to rip through light and medium armors, and they have even been noted to use their tails to hold knives and throwing weapons and use such weapons with deadly accuracy.[4] High Elves are known to regularly use magic in combat to gain the upper hand, Daggerfall Covenant forces are told to close the gap to avoid being killed by magic.[4]

The weapons and armor for the Dominion Military are standardized for all troops and deviations from the norms are not acceptable for military use.[3] The design of the armor and weapons is very elegant and uses the Aldmeri Eagle quite a bit; according to Aicantar of Shimmerene some even think that the eagle is overused.[3]

The weapons used by the Dominion Military are as follows:[3]

The armor used by the Dominion Military is as follows:[3]

During the Three Banners War, the Dominion Military saw extensive use in both Cyrodiil, where their forces were stretched thin by fighting Ebonheart Pact and Daggerfall Covenant forces.[7] Within the Dominion Territory fighting forces like the Imperial Legion and the Colovian Troopers invading Reaper's March.[8]

In Cyrodiil, the Dominion Military fought several engagements with both the Daggerfall Covenant and the Ebonheart Pact over several fortifications and towns. The War in Cyrodiil also extends into the Imperial City in which each of the alliances fight each other and the Daedra for control of the city.[9] The Dominion and Legion also had several clashes in Cyrodiil during the conflict.[10] The Dominion lost hundreds of soldiers in the Alliance War each fortnight.[11]

Inside the Dominion, Colovian troopers from Skingrad invaded the city of Arenthia, The Vile Manse, and were even making headway to Vinedusk Village. The Colovian Troopers were pushed out by Dominion Military forces and resistance fighters in Arenthia with the help of the Vestige.[8]

During the Tiber Wars, the Thalmor increased their hold on Valenwood. Bosmer forces had several skirmishes with the Imperial Legion, but was quickly put down after the Empire stood united against them. While the Imperial Legion prepared for the invasion of Valenwood, Dominion forces were sent to probe the Imperial's defenses, but they were easily pushed back. In fact, they were so easily pushed back that the Imperial Legion Soldiers took to calling the Dominion forces "Old Mary Dominion." The Dominion Navy however, fared much better in the Cape of the Blue Divide and Topal Bay. Eventually the Empire resorted to using the Numidium and conquered the entire Second Aldmeri Dominion.[12]

When the Aldmeri Dominion sent Emperor Titus Mede II the heads of all the blades in the Summerset Isles, and the Great War started the Dominion Military invaded both Hammerfell and Cyrodiil. All across the Empire, Imperial Legion forces were pushed back time and time again. The Dominion Military quickly took the city of Leyawiin and cut off Bravil in Cyrodiil. Meanwhile in Hammerfell, the Dominion pushed the Imperials back across the Alik'r in the now infamous March of Thirst.[13]

Soon the Emperor and his armies were forced to fight their way out of the city. The Dominion, led by Lord Naarifin, took the city. Under Dominion rule the Arena was shut down for a period of time. All access in and out of the city was closed off. What happened inside the city is mostly unknown, but it is known that Naarifin attempted to cause The Culling, which nearly succeeded but was stopped by the hero from The Elder Scrolls: Legends.[14]

As the war went on, Imperial resistance stiffened in Hammerfell, but still the Dominion pushed on. The Emperor decided to invade the Imperial City as one last ditch effort. The Imperials withdrew forces from Hammerfell for support for the offensive on the Imperial City. The Imperials invaded, attacking from all three sides, and with great loss, took it back. The Great War then ended when the Emperor signed the White-Gold Concordat.

A High Elf soldier during the Great War.

An elite soldier serving Lord Naarifin during the Great War. 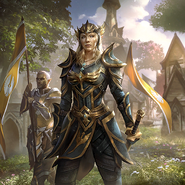 Queen Ayrenn, the head of both the Dominion military and the First Aldmeri Dominion during the Alliance War.
Add a photo to this gallery

Retrieved from "https://elderscrolls.fandom.com/wiki/Dominion_Military?oldid=2998370"
*Disclosure: Some of the links above are affiliate links, meaning, at no additional cost to you, Fandom will earn a commission if you click through and make a purchase. Community content is available under CC-BY-SA unless otherwise noted.