"Is your armor made of... dragon bones? By the gods, what I wouldn't do for a set of that."
―Hold Guard

The Dragonplate armor and Dragonscale armor are armor sets found in The Elder Scrolls V: Skyrim.

Light and Heavy variants of Dragon Armor can be forged from dragon bones and dragon scales. The "Dragon Smithing" perk must be acquired before this armor type can be crafted. The perk requires Smithing level of 100.

The materials for crafting Dragon Armors are much more common than the materials needed for their competitor's Daedric and glass armors.

Compared with other armor types

Overall, Dragon Armor is cheaper to craft and lighter than other armor types with high defense ratings.

Daedric armor has a higher armor rating than Dragonplate Armor at its base value and retains its higher rating even when both armors have been upgraded to Legendary status (but just by a small margin). However, with its lower weight, Dragon Armor is the more suitable choice when lacking proper heavy armor perks.

Dragonscale Armor has a superior armor rating to Glass armor, but a higher weight. Once upgraded, dragonscale armor remains with a higher rating but still only by about 7, making the weight difference a problem, even though the full Dragonscale set weighs less than a single iron armor piece. It should also be noted that with the right perks invested in light armor, the Dragonscale armor will render the Glass armor useless, as it will have a much higher rate.

Occasionally, when walking by a guard, they whistle and say "Is your armor made of... dragon bones/scales? By the gods, what I wouldn't do for a set of that." 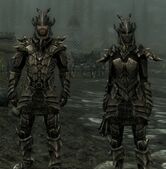 Concept art for the Dragonplate armor

Retrieved from "https://elderscrolls.fandom.com/wiki/Dragon_Armor?oldid=1418863"
*Disclosure: Some of the links above are affiliate links, meaning, at no additional cost to you, Fandom will earn a commission if you click through and make a purchase. Community content is available under CC-BY-SA unless otherwise noted.
FandomShop Fandom IG GalaxyQuest