View source
watch 02:19
Wiki Targeted (Games)
Do you like this video?
Play Sound

Dovah-Sonaak, "Dragon-Priest(s)") are powerful Undead[note 1] enemies found in The Elder Scrolls V: Skyrim. Thousands of years ago, these priests ruled over Skyrim at the behest of their Dragon overlords. In their service, many of these dragon priests were granted extraordinary powers and knowledge in arcana, and some of them even managed to reach lichdom to evade their own demise, thus becoming immortal. They are typically buried in one of the many ancient tombs and temples dotted all across Skyrim, awaiting the return of Alduin the "World-Eater."

During the Merethic Era, Dragons ruled much of Tamriel and Atmora. They believed that as they were the children of Akatosh, they were naturally superior to both man and mer.[1][2]

One of their core beliefs was that power equaled truth. The fact that they held immense power over mortals led them to the conclusion that this itself was the ultimate truth. This gave them the justification in their minds that their rule over mortals was only natural.[2]

The dragon priests themselves can be traced back to Atmora, where they were the ruling body during the Merethic Era. Known as the "dragon cult," they worshipped many animals as avatars of the gods, the Dragon being chief among them.[2]

Dragons embraced their role as god-kings over men, but rather than deal with the actual ruling itself, they granted small amounts of power to dragon priests in exchange for absolute obedience. In turn, the priests ruled men as equals to the kings. The priests set down laws and codes of living that kept peace between Dragons and men, but to do so they demanded tribute.[2]

When the Atmorans began to migrate to Tamriel over the next several centuries,[3] the dragon priests and cultists were some of the first men to arrive. The system of rule in Tamriel, however, was quite different from Atmora. It is unclear why this was the case, but the priests began to rule with an iron fist, making slaves of the rest of the population.[2]

At the height of the dragon cult's influence, the capital of Skyrim was considered to be the city of Bromjunaar, located in what is now Hjaalmarch hold. It was here the highest ranking priests met within the temple of Labyrinthian to confer about matters of ruling.[4] It was also during this time that the highest-ranking dragon priests were granted magical masks that defied the laws of time, and bore powerful enchantments.[5] It is unknown if masks were named after the priests who wore them, or if the priest took on the name of the mask that was granted to them.

Eventually, men rebelled against the cruelty of the cult in what is known as the Dragon War. After Alduin was banished from Nirn, a large number of the cultists were killed and the surviving dragon priests were overthrown.[2]

The survivors adapted and went into hiding all across Skyrim. They entombed the remains of the dragons that died during the war within dragon mounds, with the belief that Alduin would one day return and resurrect the faithful.[6] However, other sects within the cult believed only those who ascended to the priesthood would be granted a second life.[7]

Upon death, the dragon priests insisted that their followers be buried with them in the various Dragon temples and tombs across Skyrim. This act served a specific purpose, rather than a vain display of power. Because the concept of resurrection upon the return of Alduin was a core belief of the dragon cult, the priests required their followers to perform a daily ritual to facilitate this.[7]

Every day, a group of followers that were entombed with the priest would awaken and gather around the sarcophagus of their respective priest. Here, they would prostrate themselves before it for several hours. During this time, an exchange of life force took place between the followers and the priest. This exchange sustained the dormant priest until it was time for his resurrection. Once the ritual was complete, the followers meticulously cleaned the area and would return to their burial chambers. While resting, the drained life force would magically restore itself, ready for the next day.[7]

It is believed that the followers who were doomed to perform this ritual were initially buried as grown men and women, but over thousands of years they deteriorated into the draugr that now pledge to guard the ancient Nordic tombs with their lives.[7]

The last known remnants of the dragon cult remained up until 1E 140, when a legion of King Harald's soldiers discovered a hidden stronghold of cultists in the secluded monastery, Forelhost, high in the Jerall Mountains. They shortly laid siege to it.[8] Miraak, a renegade dragon priest, was able to survive until 4E 201 in the daedric realm of Apocrypha before he was defeated by the Last Dragonborn.[9] 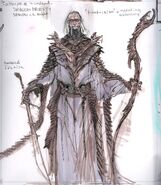 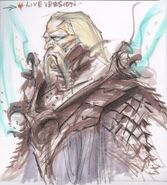 Banner of a Dragon Priest in Skuldafn

Čeština Español
*Disclosure: Some of the links above are affiliate links, meaning, at no additional cost to you, Fandom will earn a commission if you click through and make a purchase. Community content is available under CC-BY-SA unless otherwise noted.
Advertisement