For other uses, see Dragonborn.

Dragonborn, also referred to as Dovahkiin in the Dragon Language, are individuals with the body of a mortal, but the blood[1] and soul of a Dragon.[2][3] Some believe that Dragonborn appear on the world in times of great need by the command of the Gods.[4]

"Dragons have the inborn ability to learn and project their Voice. Dragons also are able to absorb the power of their slain brethren. A few mortals are born with similar abilities -- whether a gift or a curse has been a matter of debate down through the centuries. What you have already learned in a few days took even the most gifted of us years to achieve. Some believe that Dragonborn are sent into the world by the gods, at times of great need."
―Arngeir[src]

By Nord tradition, a Dragonborn represents what a Nord should strive to be. The Nords believe Dragonborn represent the end of all of Skyrim's foes.[5] Nord tales likewise tell of Dragonborn of old who were great and powerful Dragonslayers,[1] a belief which the Blades of the late-Fourth Era also believe to be the reason why the old Akaviri Dragonguard came to serve the Dragonborn.[6]

After slaying a Dragon, and learning the meaning of a Word of Power, the Greybeards are able to sense this and summon the Dragonborn. Should a Dragonborn choose to answer the summons of the Greybeards, they are first tested to see if they truly possess the Thu'um.[7] A Dragonborn has the inborn ability to both learn and master a new Word of Power far quicker than a normal mortal can, as regular mortals usually need years of training to learn a word of power. Due to the inborn ability of Dragonborn to use the Thu'um, the Greybeards seek to guide them in the proper usage of their power.[4]

Miraak, who lived during the Dragon War of the Merethic Era, became known as the First Dragonborn.[10] The three tongues, Hakon One-Eye, Gormlaith Golden-Hilt, and Felldir the Old, who led the charge against Alduin had asked Miraak for his aid,[11] though Miraak denied, having other plans.[12] Miraak would eventually be defeated in combat by Vahlok the Jailor, though saved by Hermaeus Mora.[13]

During the First Era, the Nedic slave rebellion in Cyrodiil against the Ayleids would take place, being led by Slave Queen Alessia.[14] Alessia, being a Dragonborn,[15] was gifted the Amulet of Kings by Akatosh, which would be used to light the Dragonfires and keep the armies of Oblivion at bay.[16] Alessia's line would continue with more Dragonborn Emperors and Empresses, until their deaths.[1]

In 1E 2703, the Akaviri attempted an invasion of Tamriel, which would eventually be foiled by the efforts of Reman Cyrodiil.[17] The exact nature of the defeat of the Akaviri is unknown, though it is known that they were not seeking for combat with Reman, but were instead searching for him, as he was Dragonborn.[3][1] Under Reman Cyrodiil, the Dragon blood officially became part of becoming a legitimate Emperor, as he included the ritual geas to the Amulet of Kings,[18] and the lighting of the Dragonfires, in the rites of becoming an Emperor.[19] His dynasty would continue until the death of Juilek Cyrodiil during the Four Score War.[17]

As of 2E 579, it had been years since the last Dragonborn Emperor had ruled. Following his successful rebellion against the Longhouse Emperors, Varen Aquilarios aimed to legitimize his rule through lighting the Dragonfires. Varen was not a Dragonborn, and was convinced by Mannimarco to participate in a ritual, which would end up being a trick. Instead of becoming a Dragonborn, Varen and his companions were forced to the ground, while Mannimarco corrupted the power of the Amulet of Kings to trigger the Soulburst, and eventually Planemeld,[19] until it was stopped by the Vestige.[20]

After Kaalgrontiid and his kin were freed from the Halls of Colossus, one such dragon named Sahrotnax was captured by the Hollowfang Clan of vampires with the assistance of the rouge Dragonguard Grundwulf, who then proceeded to drink his blood believing it would make him Dragonborn and with that power unite the fractured Empire once more. Though the ritual granted him extraordinary abilities, he was slain shortly afterward.[21]

Years later, in 2E 828, another Dragonborn would be placed on the world. There are rumors about a Dragonborn who will defeat the Elves and restore the Empire. These rumors and the Greybeards' rumblings prompt Wulfharth, and he believes he is the Dragonborn of prophecy. Therefore he travels to High Hrothgar to meet with the Greybeards, but is blasted to ash as they speak.[22] After his encounter with the Greybeards Wulfharth goes to find the Dragonborn, a warrior from High Rock named Hjalti Early-Beard, who would come to be known as Tiber Septim.[22][23] Tiber Septim would learn the Thu'um from Wulfharth,[22] and meet the Greybeards shortly after, who told him he was destined to unite Tamriel.[23] During his campaigns in Cyrodiil, he would find the Amulet of Kings during the Battle of Sancre Tor against the Nord-Breton Alliance.[24] After having become Emperor, Tiber Septim declared the start of the Third Era.[25]

Tiber Septim's dynasty of Dragonborn Emperors would continue to rule the Third Empire until the Oblivion Crisis. Under the reign of Emperor Uriel Septim VII, the Mythic Dawn attempted to slay the Dragonborn Emperors and thus provide Mehrunes Dagon with the means to cross over into Tamriel. Uriel Septim and his three sons were assassinated,[26] with only his illegitimate son, Martin Septim having survived.[27] The leader of the Mythic Dawn cult, Mankar Camoran, was likewise a Dragonborn, able to speak fire[28] and wear the Amulet of Kings.[29] Mankar would eventually be slain in his Paradise,[30] whereas Martin Septim would meet his end after he destroyed the Amulet of Kings in order to banish Mehrunes Dagon.[31]

After learning Dragonrend, the Last Dragonborn was able to face off against Alduin atop the Throat of the World, winning a minor victory against the World-Eater, though Alduin did escape to Sovngarde.[11] The Dragonborn would give chase, and through the help of Odahviing, they would gain access to Skuldafn and its portal to Sovngarde.[35] In Sovngarde, the Last Dragonborn would meet up with the three Nord Tongues of old, Gormlaith, Hakon, and Felldir, and together they faced off against Alduin, defeating him in combat.[36] It is unknown if Alduin was truly slain, as in contrast to regular Dragons, his soul was not absorbed. The leader of the Greybeards, Arngeir, believed that it may have been possible that he could return to fulfill his true destiny, though that was for the gods to decide.[37] 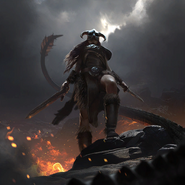 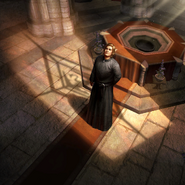 Martin Septim, the last of the Septim Dragonborn Emperors.

Tiber Septim, the first of the Septim Dragonborn Emperors. 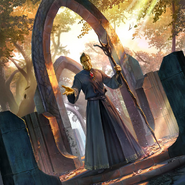 Mankar Camoran, the leader of the Mythic Dawn cult.

Notice: The following are unlicensed references. They are not copyrighted by a ZeniMax Media company, but can still be considered part of The Elder Scrolls lore and are included for completeness.
Deutsch Español Français Italiano Nederlands Norsk Polski Português Русский
*Disclosure: Some of the links above are affiliate links, meaning, at no additional cost to you, Fandom will earn a commission if you click through and make a purchase. Community content is available under CC-BY-SA unless otherwise noted.
Advertisement