For other uses, see Dragons.

"Most Nords of Skyrim believed Dragons were only a legend. Until now."
―Loading screen[src]

Dragons (Dovah, or Dov in plural) are a reptilian race from Akavir that were once widespread throughout Tamriel. Although seeming rather beast-like, they are profoundly intelligent, capable of speech, written language, and comprehension of other languages.[1] Their spoken language can be used to cast powerful magic known as Thu'um or dragon shouts. They were virtually extinct until 4E 201, when they resurfaced in Skyrim with the return of Alduin.

Dragons can attack anywhere outdoors in Skyrim and random encounters are scripted to take place after a certain amount of in-game time has passed without a Dragon appearance. Thus, fast traveling to an outdoor location is a reliable way to trigger a random Dragon encounter.

There are, however, certain locations where Dragons are scripted to appear. These locations are called dragon lairs that can be found all over Skyrim. In these locations Dragons are typically perched atop word walls that they are guarding.

These locations are not dragon lairs, but a dragon is guaranteed to be present.

These are dragons encountered throughout Skyrim. Essentially identical to random nameless dragons in terms of gameplay, these Dragons are usually encountered during the main quest with individual names and dialogue:

Dragon Riding is a feature added in The Elder Scrolls V: Dragonborn that grants the ability to temporarily tame and ride Dragons. All three words of the Bend Will shout are required in order for it to work. When the shout is directed at a dragon, it will land and allow the Dragonborn to mount it. As soon as the dragon has been mounted, it will take to the skies. This introduces a new control scheme that allows the Dragonborn to command the dragon they are riding to attack targets. 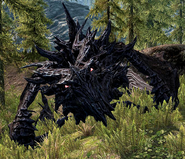 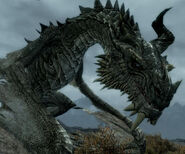 Odahviing in Dragonsreach, after being released.

A dragon lies on the floor at Dragontooth Crater.

Deutsch Español Français Italiano Nederlands Polski Português Русский Türkçe Українська
*Disclosure: Some of the links above are affiliate links, meaning, at no additional cost to you, Fandom will earn a commission if you click through and make a purchase. Community content is available under CC-BY-SA unless otherwise noted.
Advertisement