For other uses, see Dragon Armor.
Not to be confused with Imperial Dragonscale Cuirass.

"Is your armor made of... dragon scales? By the gods, what I wouldn't do for a set of that."
―Hold Guard[src]

Although it is quite rare, pieces of the set can be found as early as level 24, even without the aforementioned perk.

Dragonscale Armor is forged with dragon scales, iron ingots, and leather strips. The Dragon Armor perk must be acquired before this armor type can be crafted. The perk requires a Smithing level of 100. 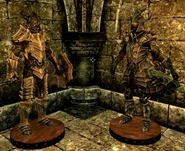 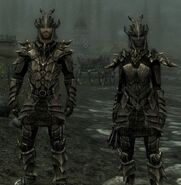