Dragonsreach is Whiterun's keep in The Elder Scrolls V: Skyrim. It was constructed in the ornate wooden style of the great Nord longhouses of ancient days. Visually and politically, it is very much the focal point of the entire city itself and perhaps even Skyrim as a whole. As is true of the keeps in other cities, Dragonsreach serves many important functions.

As the seat of government in Whiterun, Balgruuf the Greater resides here as its ruler. Dragonsreach is situated in the "Cloud District" of Whiterun and, as the name suggests, it is elevated from the rest of the city. According to the Jarl's steward, Proventus Avenicci, the building gained its name after a battle with a dragon that left the victorious party as "rulers of the clouds."

"Dragonsreach earned its name when the ancient Nord hero Olaf One-Eye imprisoned his foe, the great dragon Numinex, within the palace."
―Loading Screens[src]

According to legend, the palace today known as "Dragonsreach" was originally a smaller building. However, with the intent of creating a prison for the dragon Numinex after its defeat at the hands of Olaf One-Eye, the people of Whiterun added a stone prison to the keep and renamed it Dragonsreach. Though accounts vary on Olaf's position, the dragon's disposition, and the manner in which the dragon was captured, there seems to be little doubt about the history and purpose of the building.[1][2]

The following arrive if the Stormcloaks take over Whiterun:

The Great Hall is the main chamber of the keep and is where the Jarl holds court on his throne beyond the long tables and central fire pit. Check the shelves to the sides for all manner of books. There are balconies on the upper floor, accessed via the War Room, from which you can peer down. The head of Numinex adorns the great hall above the Jarl's throne. If you tell Lydia that you no longer require her services then she will return here and be sitting at one of the two large tables. Once Breezehome is purchased however, she will go there instead.

Two large tables and an even bigger fireplace are where the Jarl’s servants prepare the feasts of the long table.

A rough-hewn, rock-walled chamber where the servant sleeps. There is a storage room behind the door.

In this laboratory, the Court Wizard Farengar mixes concoctions and conducts research into the mysteries of the dragons' return. His bedroom and a small library are behind his main study. An Alchemy Lab and an Arcane Enchanter are available in here.

This is where the Jarl and his advisors discuss matters of state, poring over the Civil War map near the book-lined shelves. When needed, an Imperial Legate also plans from this location.

Exit onto the Great Porch if you want an impressive view to the north. According to legend, the dragon Numinex was trapped here. The old trap itself will prove itself useful once more when capturing Odahviing as part of the Main Questline.

This is the private quarters of the Jarl, and entering here without invitation results in you being removed, facing a fine, or worse. However, an Unusual Gem can be found here that pertains to Side Quest: "No Stone Unturned." The book Lost Legends is on a bookshelf in one of he side rooms off the dining room – this grants the "Forbidden Legend" main quest. In the same room on the table is the book Before the Ages of Man – when read, this improves Illusion.

Note the display case; it usually has something valuable inside.

Fianna and Gerda usually rest here, in the tiny alcove bedrooms off the main food storage and wine vat area.

The Jarl’s brother, Hrongar sleeps here. The study desk has shelves with books on them.

There are three connected chambers here: a dining area, bedroom, and book-filled study.

Dragonsreach houses a cooking pot, used for creating health and stamina recovery foods. As with most places in the game, after missions are completed that help the occupants, most of the food, cutlery, and books in Dragonsreach can be taken freely without worry of stealing.

Dragonsreach's Wizard, Farengar Secret-Fire, has an Alchemy Lab and Arcane Enchanter available for constant use with creating potions and enchanting items. Farengar sells all manner of valuable Spell Tomes and Mage Robes.

Side view of Dragonsreach.

Dragonsreach under the full moon. 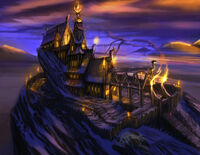 Čeština Deutsch Español Français Italiano Nederlands Polski Русский
*Disclosure: Some of the links above are affiliate links, meaning, at no additional cost to you, Fandom will earn a commission if you click through and make a purchase. Community content is available under CC-BY-SA unless otherwise noted.
Advertisement