Not to be confused with Dragontail.

"Welcome to Dragonstar, home of the Sacred Rage. We wish thee peace and rest in our city-state, but conduct thyselves honorably, or thou shalt answer to our champions..."
―Description in Arena[src]

Dragonstar or Drangstor is one of the nine major kingdoms located in the province of Hammerfell, being a major city-state in the region of Craglorn. Dragonstar is a mining town, being the home of the Dragonstar Caravan Company. It has been disputed territory between Skyrim and Hammerfell ever since the War of Bend'r-Mahk.

Dragonstar is located in Upper Craglorn, and this region has been disputed by the Nords in Skyrim and the Redguards in Hammerfell. Dragonstar is also located in Crowns territory, which consists of much of northern Hammerfell. One may consider the region a part of the Reach since it is located in the Druadach Mountains and just south of the Eastern Reach and its capital, Markarth. Dragonstar's origins date back to the Second Era, sometime during the Interregnum where many Nord miners settled in the area to mine a rare material known as Nirncrux. Dragonstar grew to a small mining village that offered work to incoming passerby. As time went one, Dragonstar grew prosperous to the point where it became a large city that rivaled the likes of Elinhir and Whiterun.

During the Interregnum, Dragonstar was a relatively new settlement that was owned by the Dragonstar Caravan Company, a trading company that rivaled the infamous Gold Coast Trading Company. At the same time, alliances from all corners of Tamriel fought each other for the Seat of Sundered Kings and the Imperial City. The Daggerfall Covenant was an alliance between the Bretons of High Rock, the Redguards of Hammerfell, and the Orsimer of Wrothgar. Craglorn at the time was not under a centralized authority and because of it, the cities of Dragonstar, Belkarth, and Elinhir were not a part of the Covenant and the Alliance War. These settlements other than Elinhir were formed by criminals trying to start an empire and escape the Imperial laws from the east. Dragonstar was cleaner than the town of Belkarth. The Dragonstar Caravan Company later moved their headquarters to the city of Ska'vyn since there is more traction in the Kingdom of Ska'vyn then in uncharted Dragonstar territory.[2][3][UL 1]

In 2E 582, Dragonstar's miners were contracted by Regent Cassipia to mine Nirncrux from the Upper Craglorn mountains. Cassipia learned that the Nirncrux element had a significant connection to the Celestials and that she could utilize the Nirncrux to enhance the Iron Orcs' armor in her favor. Cassipia was a member of the Scaled Court, a group that worship the Celestial Serpent. After she had learned about the power of Nirncrux, she sought to become as powerful as a Celestial and to replace the Serpent as the leader of the Scaled Court. She manipulated a traveler known as the Vestige by slaying a creature referred to as the Mantikora and defeating Exarch Braadoth of the Iron Orcs. She was defeated in the ruins of Reinhold's Retreat by the Vestige and other warriors.[4][5][6]

The Shadow of Conflict; War of Bend'r-Mahk[edit | edit source]

During the Imperial Simulacrum in 3E 397, the Nords of Skyrim crossed the Reach and invaded the neighboring nations of the Western Reach such as Elinhir and Jehanna in a war known as the War of Bend'r-Mahk. The city of Dragonstar was heavily affected by the war, and as a result, the city changed drastically from before the war. The Skyrim invaders led by General Duvais took the eastern district of Dragonstar and used it as a base while the Hammerfell defenders led by Meya Violet kept the western district under Crowns control. Many of Dragonstar's citizens were affected in the battle and were left homeless in its wake. Pergan Asuul used the war to nurture a creature made of pure Shadow Magic known as the Umbra' Keth, or the Shadow of Conflict. A hero known as the Soul of Conflict used an artifact known as the Star Teeth to defeat Asuul and the Umbra' Keth at the Crypt of Hearts. The conflict in Dragonstar ended, and the people began to rebuild from the destruction. Dragonstar however, remained divided for quite some time.[7][8][9]

Throughout the rest of the Imperial Simulacrum from 3E 389 to 3E 399, Emperor Uriel Septim VII was imprisoned along with Talin Warhaft in the Deadlands by Jagar Tharn. Tharn planned for months to capture the throne, and he was able to achieve so in the span of ten years. Tharn had a powerful weapon called the Staff of Chaos, and he split it into nine pieces and scattered them across Tamriel, the staff was the only thing keeping Uriel Septim and Warhaft in Oblivion. A warrior escaped his clutches and traveled all corners of Tamriel to retrieve the missing pieces. The hero was known as the Eternal Champion, and he assembled the staff and defeated Jagar Tharn at the Imperial Palace. The Eternal Champion had at one point visited the city of Dragonstar in their quest to recover the pieces. The city of Dragonstar was under the rule of King Ohatan.[10]

Sometime around the Oblivion Crisis, the territories of the Western Reach were still being fought over between the Nords and the Bretons and Redguards. The cities of Elinhir and Jehanna continued to fight while the town of Dragonstar continued to be divided into West and East. Frequent terrorist attacks from both sides and vicious street battles continued to plague Dragonstar well after the war had ended. This situation persisted well into the late Third Era, with no resolution in sight.[8] 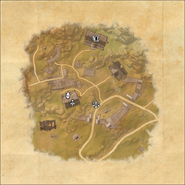 Dragonstar Rider in Legends.
Add a photo to this gallery

Notice: The following are unlicensed references. They are not copyrighted by a ZeniMax Media company, but can still be considered part of The Elder Scrolls lore and are included for completeness.
Retrieved from "https://elderscrolls.fandom.com/wiki/Dragonstar?oldid=3115082"
*Disclosure: Some of the links above are affiliate links, meaning, at no additional cost to you, Fandom will earn a commission if you click through and make a purchase. Community content is available under CC-BY-SA unless otherwise noted.