Not to be confused with Dram Bero.

"Redguard, one way out: through me."
―Dram[src]


Dram was a Dunmer assassin during the Second Era. He is an ally of Tiber Septim and the Empire and served under the orders of Amiel Richton on Stros M'kai. His enemies are Cyrus and the Crowns.

Dram is a believed descendant of the assassins responsible for destroying the Reman Bloodline.[1]

Dram was first born in 2E 612 in Morrowind, but, in truth, has died and reincarnated three times over. His most recent incarnation was reborn in 2E 800, after his secret execution at the hands of the Tribunal and House Indoril. As he matured he joined the Morag Tong and began his worship of Sithis.[1] At some point he obtained the Bow of Shadows[2]

When Tiber Septim gained the Cyrodiilic Crown, Dram went to Cyrodiil and became one of his most trusted allies. He also trained under Tiber Septim's battlemage Zurin Arctus.[1] During the Battle of Hunding Bay Dram shot a poisoned arrow at the Crown Prince A'Tor, killing him. After this victory on the island of Stros M'kai, the island was then put under Imperial control and Dram was assigned to kill any remaining rebels by the orders of Amiel Richton.[3]

In 2E 864 he battled the Redguard rebel Cyrus on multiple occasions. After Cyrus retrieved N'Gasta's Amulet, he questioned and threatened Richton. After Cyrus killed three guards, he was knocked unconscious and thrown in the palace catacombs by Dram. Their last battle was on an airship floating above the island. After Cyrus defeated Amiel in combat, Amiel distracted him in his last moments. This allowed Dram to sneak up on Cyrus and hold a dagger to his throat. The manifested sword of Prince A'Tor, the Soul Sword, then flew on its own fatally stabbing Amiel and then proceeded to cut Dram in half, lengthwise.[4]

Dram will come with Richton when Cyrus enters the palace. After the governor is threatened, the three elite guards must be killed. Upon doing so Dram will knock Cyrus unconscious and take him to the catacombs.

After escaping Dram will appear in the cutscene saying that he'll find and defeat Cyrus.

After Cyrus is given a map piece for the Flask of Lillandril by Joto, Dram will shoot the Khajiit.

Attack on the Palace[edit | edit source]

Dram must be defeated at the palace, after which he will flee. During a cutscene after defeating Amiel Richton, Dram will hold a dagger to Cyrus' throat. The Soul Sword will fly up and kill Dram after that. 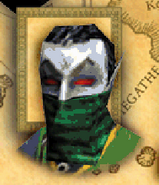 Dram threatens Cyrus with a dagger

Richton and Dram concept art
Add a photo to this gallery

Retrieved from "https://elderscrolls.fandom.com/wiki/Dram?oldid=3076642"
*Disclosure: Some of the links above are affiliate links, meaning, at no additional cost to you, Fandom will earn a commission if you click through and make a purchase. Community content is available under CC-BY-SA unless otherwise noted.