Dreams of a White Guar

Shield of the Undaunted

Dreams of a White Guar is a miscellaneous quest in The Elder Scrolls III: Morrowind.

If the Nerevarine talks to Urshamusa Rapli, she recognizes the Hero from her dreams, in which they recovered a White Guar to help the tribe fight against the Blight. She will then, ask the Nerevarine to find the White Guar.

Having found the Ahemmusa Camp, the Nerevarine engages in a conversation with Urshamusa Rapli. She will explain that she has been dreaming of a stranger finding the White Guar for some time now. Believing that the White Guar will help her tribe, she asks the Hero to find the guar.

She indicates to look for a forking trail, where "the rocks grow from the earth like fingers on a hand." Following the main path that leads from the south of the camp. Going towards the south-west, soon, the Nerevarine finds a crossroad with five tall boulders, at midway between Tel Vos and Kushtashpi. Behind the rocks, the guar is hiding. Once in the area, the guar starts moving, therefore, it is possible that it has moved not far.

Following the guar leads to the dead body of Ashamanu. The Nerevarine must recover her amulet. After returning the amulet to Rapli, the Nerevarine will receive the Shield of the Undaunted, a light armor shield with a minor restore fatigue enchantment. 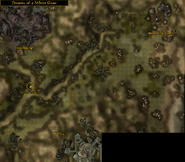 The White Guar
Add a photo to this gallery
Retrieved from "https://elderscrolls.fandom.com/wiki/Dreams_of_a_White_Guar?oldid=2785178"
*Disclosure: Some of the links above are affiliate links, meaning, at no additional cost to you, Fandom will earn a commission if you click through and make a purchase. Community content is available under CC-BY-SA unless otherwise noted.