Not to be confused with High King Durac.

Dumac (also known as Dumac Dwarf-Orc,[2][3] and Dumac Dwarfking,[4] or Dumalacath)[5] was a Dwemer king, head of the clans in Resdayn during the First Era, now known as Morrowind.

During the Skyrim Conquests in 1E 416, Dumac and Indoril Nerevar formed the First Council, an alliance of Chimer and Dwemer, against the Nordic threat.[6][2] During the history First Council, it is noted that the Rourken Clan refused to join him.[7]

The combined armies of the Chimer and Dwemer were successful in stopping the Nordic Invasion.[6][8] He and Nerevar were known to have been in attendance of the coronation of Emperor Gorieus of Cyrodiil in 1E 461, diplomatically representing Resdayn in relative peace.[9]

Unbeknownst to him, one of his chief council members, Kagrenac, was working in secret to create a new Dwemer God. Voryn Dagoth discovered this, informing Nerevar, who then went to ask Dumac if the statement was true. Kagrenac took great offense, asking Nerevar who he was to question their affairs, and Dumac claimed his people were innocent of any wrongdoings.[8][10] Nerevar later went to Vvardenfell one last time to negotiate with the Dwemer, quarreling bitterly with Dumac, who was still oblivious to Kagrenac's plans. The First Council broke down, and the War of the First Council began.[8]

During the resulting Battle of Red Mountain, Dumac led the Dwarven forces out of their strongholds, having automatons and atronachs at his command.[3] Nerevar drew Dumac's armies into the fields, where they were defeated by his generals, while he travelled to the Heart Chamber. Nerevar killed Dumac with the Ethos Knife,[3][11] and they both collapsed from the wounds and draining magics.[8][10]

Another account state that Dumac and Nerevar weren't at odds during the Battle of Red Mountain and that they joined forces to stop Wulfharth from using the power of the Heart of Lorkhan. According to this version of the battle, King Wulfharth was resurrected as Shor's avatar and amassed an army comprising of Nords, orcs, and House Dagoth to obtain the Heart of Lorkhan, which to the Nords was considered the Heart of Shor. In the climactic battle at the Battle of Red Mountain, Wulfharth had obtained the Heart but needed time to acclimate to its power. During this time, he and Voryn Dagoth faced Nerevar and his two companions, Alandro Sul and Dumac Dwarfking. Wulfharth blinded Alandro Sul with a shout and slew Dumac, but was weakened by a blow from Dumac's warhammer, Sunder. Sunder had made the Heart solid and enabled Neravar to slay Wulfharth with a surprise side attack with Keening and cut out Wulfharth's heart.[4] 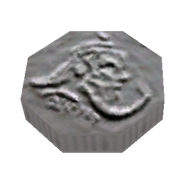 Dumac's visage as seen on a Dwemer Coin.