Dunmer, also known as Dark Elves, are gray-skinned elves and the natives of Morrowind. Many of them belong to one of the seven Great Houses. Adept with sword and magic, Dunmer are a versatile race.

The Dunmer were once the Chimer (Changed Folk, or The Changed Ones), who were a people of the Altmeri who had abandoned the ways, customs and laws of the Summerset Isles, and embarked on a great exodus to Morrowind. They followed the Veloth, who spoke to them on behalf of Boethiah, the Daedric Prince of Plots. These teachings spawned a new culture on Tamriel and a new people, even though the Chimer were physically indistinguishable from Altmer. At the time of exodus and until their change, the exiles were known as the Velothi. The term can be used in a general sense for the Dunmer as well, though it carries a specific meaning referring to ex-Ashlanders who abandoned their nomadic societies.[1]

At the time of the Velothi's mass exodus, Morrowind was known as Dwemereth, after the enigmatic Dwemer who already inhabited the region. The exiles settled there and flourished, developing what is now known as Velothi High Culture, based on worship of the three Good Daedra and respect for the House of Troubles and the new customs. The ruins of Velothi Towers that now dot Morrowind are attributed to this period and are only common to tell-tale stories made up of legendary proportion.[1]

Sometime around the rise of the First Empire of the Nords in Skyrim, the Velothi civilization broke down into a relatively primitive collection of clans and tribal warfare. Because of the slave revolt, many Strongholds went into opposition to hide and protect Vvardenfell's borders from the Early Nord Skirmish squads. The so-called Dunmer Strongholds of Morrowind were most likely built at this time, for defense against Nordic raiders and other Chimer too, who did not seek exile with the rest at the time of exodus. Such disunity allowed Skyrim to conquer Morrowind. The Nords ruled Morrowind, now called Resdayn, under the reign of semi-corrupt Nord Tyrants for many years, until fighting of their own (the War of Succession) allowed the Chimer and Dwemer to form an alliance against the vulnerable and rebellious Nords, and oust the occupiers.[1]

Azura's Curse and the Chimer's Transformation

This was the era of the First Council, when the modern Great House system was in productions form but already developing, with Indoril Nerevar Moon-and-Star and his three advisors (the Tribunal ; Almsivi) at the fore. This included Almalexia, Vivec the warrior-poet, and Sotha Sil. As every student of eastern history knows, the union did not last long. After a supposed summoning of Azura at Red Mountain, where the Dwemer and Chimer fought the last of the opposing forces, Azura laid her curse upon the already-exiled Chimer. The supposed murder of Indoril Nerevar Moon-and-Star by the summoning ritual made by the Tribunal, Azura appeared, with Indoril dead, and her words hissed: ' May the eyes of the Changed Ones be turned as red as this volcanic ash, and may their skin be as blackened as their hearts. The accursed drawn, blood from the master spilled, and a curse shown in the race of these folk, forever-more'. This led to the hiding of Vivec in the Ministry of Truth and the recession of the cultures of the now accursed Chimer. Azura withdrew from the mountain, and there upon the now-Dunmer lay with ashen souls, and would reflect change in the Eras to come.[1]

After the Nordic occupation of Morrowind, many Dunmer remained distrustful of outsiders, which is likely where their hatred for 'Outlanders' came from. The native Dunmer especially hate Dunmer who were not born on Morrowind, regarding them with suspicion, and seeing them as 'impure'. If the player chooses to be a Dunmer on The Elder Scrolls III: Morrowind, they will still be called an 'outlander', as they were born somewhere else entirely.

Gods worshiped by the Dunmer folk of Morrowind include: [2]

Dark Elves are best for players who want to do as much as possible in the game. Their skills are very diverse from Mysticism to Short Blade and every enemy has a weakness you can exploit. Dark Elves make for one of the most offensive races in the game. Use this to your advantage. 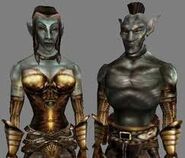 Retrieved from "https://elderscrolls.fandom.com/wiki/Dunmer_(Morrowind)?oldid=2966107"
*Disclosure: Some of the links above are affiliate links, meaning, at no additional cost to you, Fandom will earn a commission if you click through and make a purchase. Community content is available under CC-BY-SA unless otherwise noted.