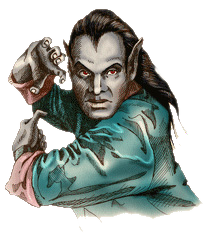 "Also known as "Dunmer" in their homeland of Morrowind, the Dark Elves are noted for their skilled and balanced integration of the sword, the bow and destruction magic. They are resistant to fire and can summon an ancestral ghost for aid."
―In-game description[src]

The Dunmer, more commonly referred to as Dark Elves, are the dark skinned elves originally from the province of Morrowind. They have red, glowing eyes and their skin tones vary from green to grey, and even light blue. They are known to be extremely strong, intelligent, and very quick, but are said to be ill-favored by fate.

Their combination of powerful knowledge learned from centuries past and strong, agile physique make them superior warriors and sorcerers of great and powerful magic. Dunmer are proficient in archery, Destruction magic and swordsmanship. Offensive Spells seem to prove worthy alongside a spellcasting Dunmer in battle.

They are grim, aloof, and reserved, keeping to themselves as much as possible. They are just as distrusting and disdainful of other races as they are to other Dark Elves. The Dunmer and their national character embrace these various connotations with enthusiastic behaviors. In the Empire, 'Dark Elf' is the common used term used by any humanoid race, but in their homeland, Morrowind, and among their Aldmeri brethren, they are known as Dunmer.

In Morrowind, the main religion is the worship of the Tribunal Temple but a large number of Dunmer also worship Daedric deities. To this day, many of them also practice ancestor worship.[2] They see Mephala, Azura, Boethiah as primary Daedric deities, and their lack of proper social behaviors links them to their dark worshiping of the gods. The commoners ban their behaviors with harsh distrust. The lack of proper etiquette among these dark-skinned elves make them far inferior in the eyes of an Imperial.

"I must surely be dead, and in the halls of Azura to look upon such a vision. You are so beautiful, my dear Dunmer maiden... One of the guards owes me a favor, you know. I could get us put in the same cell. Would you like that? You should have some fun before the end. Yeah, you heard me. No matter what the law says. No matter what they told you. You're going to die in here! You're going to die!"
―Valen Dreth to female Dunmer[src]

The Dunmer are well-balanced characters. They could excel at any of the three class specializations due to their broad skill set. With Destruction bonuses and combat bonuses to start off with, they make efficient Battlemages, Nightblades, Witchhunters, and Spellswords.

Their 50% Resist Fire makes traveling through Oblivion plane, where fire-wielding Daedra are often encountered, that much easier. This resistance also cancels out the Weakness to Fire acquired when Dunmers become vampires. As vampires, Dunmers gain additional bonuses to Light armor, Destruction, and Blade, skills they already excel at.

Hostile Dunmeri are most frequently encountered as Bandit Bowmen or as Bandit Ringleaders, based on the Luck attribute. These Dunmer tend to be equipped with light armor and archery equipment (or a blunt weapon in the case of Ringleaders). Among hostile vampires, the Assassins, Battlemages, Nightblades, and Pilgrims are Dunmer, including Assassin Vampire Matriarchs and Patriarchs. These classes seem to reflect, when showing bonuses and affected skills, that they work well with the player-character Dunmers.

Retrieved from "https://elderscrolls.fandom.com/wiki/Dunmer_(Oblivion)?oldid=3075994"
*Disclosure: Some of the links above are affiliate links, meaning, at no additional cost to you, Fandom will earn a commission if you click through and make a purchase. Community content is available under CC-BY-SA unless otherwise noted.