The Dunmer, more commonly known as Dark Elves, are the grey-skinned elven natives of the province of Morrowind. After the eruption of Red Mountain, many Dunmer fled to Skyrim, where they have endured extreme prejudice as a result of their elven heritage and status as refugees. In spite of this, many Dunmer have been able to establish themselves in Tamriel's northernmost province as skillful merchants and mages.

Dunmer have characterizing glowing red eyes and grayish skin tones that range from shades of blue to green.

Both male and female Dunmer have a height of 1.0, which is the standard height for the majority of races in Skyrim. When compared with the other elven races, the Dunmer are taller than the Bosmer (0.95) and shorter than the Altmer (1.08).[note 1]

After the eruption of Red Mountain, many Dunmer fled to Skyrim. Several took up residence at the College of Winterhold, in order to bolster their innate magical talents.[1] Many more fled to Windhelm, which was the seat of the Stormcloaks' resistance against the Empire of Tamriel.

Before the destruction that led to the mass exodus of the Dunmer, many of Azura's worshipers received visions of the eruption of Red Mountain. Setting out for Winterhold, these Dunmer built the Shrine of Azura and remained there as priests and priestesses, though they eventually left over time, driven away by the fear of learning their future through the visions that Azura provided. By 4E 201, only one remained, Aranea Ienith.[2]

"Also known as "Dunmer" in their homeland of Morrowind, dark elves are noted for their stealth and magic skills. They are naturally resistant to fire and can call upon their Ancestor's Wrath to surround themselves in fire."
―Racial description[src]

All races start the game with Flames and Healing, but only Dunmeri characters have immediate access to Sparks.

The Dunmer is a versatile race that can fill almost any role, as a result of their racial powers and skill bonuses.

The Dunmer racial power, Ancestor's Wrath, causes fire damage to any foe within melee range, which seems to benefit most from a melee fighter play-style. Their 50% resistance to fire is very useful when fighting against creatures with fire-based attacks, such as dragons, mages, and flame atronachs. It can confer a natural immunity to heat without having to rely on enchanted apparel, such as Ahzidal's or Otar's masks.

In terms of skills, the Dunmer is an advantageous race for thieves, assassins and mages, as they offer a good balance of stealth and magical talent. This race provides a middle ground between the other Mer species, as the Bosmer are adept at stealth and the Altmer are experts of magic.

The Dunmer are known for their aptitude in magic, especially destruction magic. Dunmer also have increased abilities in other magical classes, including Alteration and Illusion.

Seeing as they have a natural resistance against fire, Dunmer could also effectively be used when playing as a Vampire with the Dawnguard add-on. As Stage IV vampires have 50% weakness to fire, the Dunmer's resistance counteracts this penalty almost entirely. 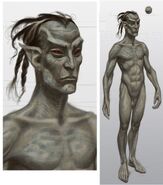 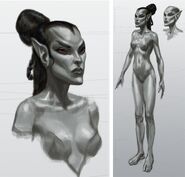 Čeština Deutsch Español Bahasa Indonesia Nederlands Polski Русский
*Disclosure: Some of the links above are affiliate links, meaning, at no additional cost to you, Fandom will earn a commission if you click through and make a purchase. Community content is available under CC-BY-SA unless otherwise noted.
Advertisement