For other uses, see Dushariran.

Dushariran is a Daedric Ruin in The Elder Scrolls III: Morrowind, in the region of West Gash, located east of Berandas.

The ruin holds a Shrine to the Daedric Prince Malacath. It is occupied and guarded by Orcs. In the main room stands a statue of Malacath and behind it, an altar. 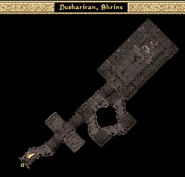 Malacath's Shrine
Add a photo to this gallery

Retrieved from "https://elderscrolls.fandom.com/wiki/Dushariran_(Morrowind)?oldid=2930074"
Community content is available under CC-BY-SA unless otherwise noted.