Dusty is a Silt Strider and the only known member of her species on Solstheim. She can be found with her owner, Revus Sarvani, just west of Tel Mithryn, near the banks of the river.

Revus found Dusty's cocoon in a small cave in Vvardenfell after the eruption of Red Mountain wiped out most of her species. He raised her into an adult, but mentions she hasn't been in travelling condition for a while and that he is staying with her until she dies. 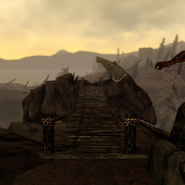 An alternative view of Dusty
Add a photo to this gallery

See more discussions >
Retrieved from "https://elderscrolls.fandom.com/wiki/Dusty?oldid=2922224"
*Disclosure: Some of the links above are affiliate links, meaning, at no additional cost to you, Fandom will earn a commission if you click through and make a purchase. Community content is available under CC-BY-SA unless otherwise noted.