For other uses, see Steam Centurion.

Dwarven Centurions are very large mechanical guardians in Dwemer ruins. Their giant bodies, undoubtedly designed for combat, are constructed of solid Dwemer blocks and armored with thick dwarven plates. Their arms are equipped with a Dwarven Warhammer and a Dwarven Battleaxe. Their enormous body makes them move slowly, but this is balanced by the ability to take lots of damage and use very powerful attacks, making them extremely dangerous to low-level opponents.

Of all the Animunculi left behind by the ancient Dwemer, the Dwarven Centurions are the most elaborately constructed, well-armed, defensive, and arguably the most dangerous.

The steam attack fired by the centurion is considered a magical attack for purposes of magic resistance; a high magic resistance will significantly reduce the damage caused by the steam. A centurion's steam attack is a medium to short ranged weapon and can usually be avoided by staying out of range, but the attack can pass through doors and damage the Dragonborn on the other side.

There are three different models of Dwarven centurions.

The basic centurions. They attack with melee and steam attacks, though have relatively low health compared to the other types.

These use powerful melee attacks, as well as spraying hot steam at their opponents.

The Centurion Master features a lot of armor, as well as the capability to do more damage to their opponents with attacks. This model also attacks with melee and steam.

A unique boss called the Forgemaster can be found in the quest "Lost to the Ages" with the addition of Dawnguard. It is larger than normal centurions and spits fire instead of steam. It is also more resistant to fire than other centurions, but it has a weakness to frost. 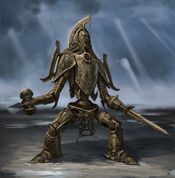 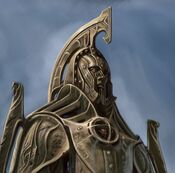