For other uses, see Dwarven Sphere.

Dwarven Spheres are partially-humanoid machines that serve as sentries or guards in Dwemer Ruins and other select areas.

Dwarven spheres can be found in all Dwemer ruins. When not engaged in combat, they are found folded up into a large metal ball shape roughly a meter in diameter, rolling around via a pair of diagonal wheels on either side. When they sense an intruder nearby, Dwarven Spheres will open up and unfold their body to full height, attacking with whatever weapons are mounted on their forearms. They can also appear out of massive pipes in the walls, popping out when a nearby trap is triggered, or simply if an intruder gets too close.

"What the Dwarven Sphere lacks in strength it makes up for in speed and mobility, as it patrols the halls of the Dwemer ruins it still protects."
―Loading Screens[src]

Though they appear lanky, Dwarven Spheres are fast and tough, and can easily defeat those who are low-leveled. They are often armed with a sword blade mounted on one forearm and a crossbow on the other, allowing them to attack both up-close and from afar.

Dwarven Spheres are stalwart opponents, resistant to all magic, and immune to poison, frost, and Illusion magic (unless the Dragonborn obtains the Master of the Mind perk). They are resistant to the vampiric drain spell. When using Dragon Shouts, they cannot be frozen with Ice Form, and a fully charged Unrelenting Force will only stagger them, not send them flying. They can also be staggered with the Impact perk, albeit very briefly.

When defeated, Dwarven Spheres will drop a random number of Dwarven metal parts, Dwarven oil, as well as varying levels of filled soul gems, making them useful for those who wield magic staves or enchanted weapons. They will also drop dwarven bolts if Dawnguard has been installed. Rarely, they will also drop Centurion dynamo cores.

* This type is only encountered in Avanchnzel and at the entrance of the Sinderion's Field Laboratory. 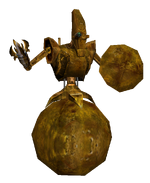 Dwarven Sphere, as seen in Morrowind. Then known as "Centurion Sphere"

A Dwarven Sphere in The Elder Scrolls Online 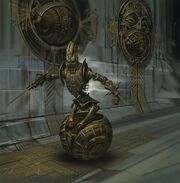