Elder Scrolls
Register
Don't have an account?
Sign In
Advertisement
in: Articles to be Split, Skyrim: Locations, Morrowind: Locations,
and 4 more
English

Dwemer ruins are the remains of Dwemer settlements, which are scattered across Skyrim,[1] Hammerfell, High Rock,[2] and Morrowind. These structures once served as significant places of knowledge to the Tonal Architects that constructed and maintained them, as well as the Dwemer residents who once lived in them. After the disappearance of the Dwemer, their cities remained untouched and their buildings structurally sound. Falmer reclaimed some of the ruins, and the Automata of Dwemer construction still patrol the halls of these ruins as faithfully as they did when their masters were around, presenting an immense danger to those who wish to traverse, navigate and explore.

These ruins are of particular interest to scholars of various colleges, universities and private institutions throughout Tamriel and contain items useful for building weapons, armor, and other items of high value; some Dwemer ruins may even contain unique artifacts. Inside Dwemer ruins there are large amounts of useful loot like weapons, clothing, armor, and miscellaneous items. Arguably the most potent enemies are the Dwarven Centurions—massive automatons that have a range of weapons including steam/fire breath, crossbow launchers, one battleaxe, one warhammer, and simple melee attacks such as kicking.

Before the disappearance of the Dwemer[]

Before the Dwemer disappeared, their cities were filled with residents, working, living and studying. Dwemer cities were commonly referred to as strongholds,[3] as well as Freehold colonies[4] and/or city-states.[1]

Dwemer cities contained many different sections for their people, which included living spaces,[5] dwellings, study rooms for academic studies and the arcane arts,[6] areas for the production of Animunculi, pumping stations, pump-houses, aerodromes, war quarters, debate halls, cathedrals, marketplaces, treasuries, armories and storerooms. Some sections of a city were sectioned off for a specific role. An Arcanex was a typically smaller structure in a city, with its role being debated by scholars. Observational studies of the Arcanex in Bthardamz reveal that the section housed a large collection of magical artifacts, including soul gems, alchemical concoctions and magical texts. Some scholars believe that those observational studies support the idea that the Dwemer did in fact dabble in the magical arts, while other scholars such as Thelwe Ghelein, who conducted the study, believes that the evidence supports an idea that Dwemer scientists and mage-engineers did more than study the arcane arts: that they also studied other Men and Mer, to learn more about the people who they had no contact with, as they would surely seem as alien to the Dwemer as the Dwemer seem alien to others. Great Animoculotories, or just Animoculotories, were industrial centers of production where Animunculi were constructed.[2]

Dwemer cities varied in size, from the smaller cities like Kagrumez and Kagrenzel to the larger cities such as Mzulft, Alftand, Mzinchaleft, Bthardamz, and Irkngthand to a massive stronghold known as Fal Zhardum Din, or Blackreach. In their cities, the Dwemer people were dedicated to study and research, both in the scientific and arcane studies.

Dwemer cities were primarily built with stone, but was also mixed with an unknown, unique metal, similar to the appearance of copper or bronze, but was truly a unique metal known only to the Dwemer. The stonework and metalwork on the structures were stylized with intricate carvings and runes. Their buildings were designed and constructed as sharp, straight, angular forms that were based on angled lines that were "intensely mathematical in nature." Dwemer architects and city-planners favored "trusted, well-calculated designs based on angled lines rather than riskier, more imprecise calculations based on arcs and curves." With the use of stone and metal and the design and construction methods and common traditions that Dwemer architects had has allowed the buildings to stay structurally sound long after their race disappeared.[7] Many hydraulic systems still functioned in the ruins of the Dwemer cities.

As the Dwemer had mastered over stonework and metalwork as an early race, Dwemer ruins were a sight to behold; they were massive and monumental in nature, filled with many grand halls and massive caverns.[8] Dwemer ruins were divided into many different sections, which included great halls, great chambers, upper districts and lower districts, marketplaces, living quarters, cathedrals, aedromes, animunculories, workshops, arcanexes, studies and corridors.

They were also filled with hazards such as fire traps, spike traps and poisoned arrows that were deadly to adventurers.

In several Dwemer cities, most notably Mzulft and the Tower of Mzark in Blackreach, stand Oculory, large, stationary and highly advanced constructions which were designed and used for a variety of functions, and rely on both magic and technology to function. The Oculory in Mzulft was designed to collect starlight, analyze it and transmute it into projectable energy, in which it projects a map of Tamriel, and highlights locations of significant, powerful magical artifacts. However, the Oculory in the Tower of Mzark in Blackreach was designed to store and protect artifacts of great significance and power, such as the Elder Scroll (Dragon).

These ruins contain Dwemer Automatons such as Dwarven Centurions, Dwarven Spiders, and Dwarven Spheres that search for their fallen creators, the Dwarves. Also to be found are bandits (although notably they don't seem to get very far into the ruins, and thus the automatons make up the bulk of enemies the player must fight in these ruins). The angered spirits of fallen Dwemer, known as Dwarven Spectres, can be found deep in many ruins throughout Morrowind and Vvardenfell. In Skyrim, a new foe, the Falmer, formerly another species of mer called the Snow-Elves, can be found in Dwemer Ruins. Having been driven off the surface, these creatures were "saved" by the Dwemer. The Dwemer later poisoned them to make them blind and kept them as a slave workforce. Most of the time these creatures will have prisoners who are normally bandits who have gone looking for treasure. 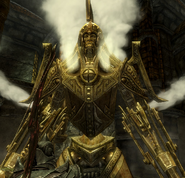 A Dwarven Centurion awaking from its stand in a Dwarven ruin.

A Dwarven Sphere seen in a Skyrim loading screen. 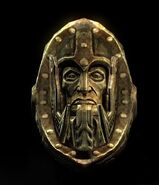 Dwarven Spider, one of the hostile enemies of Dwarven Ruins.